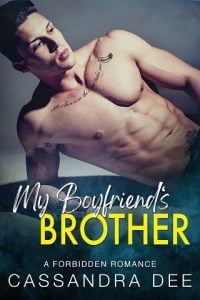 Damn, I think, glancing at the door as I settle onto the sofa. I hope he remembers to pick me up a root beer. I’m not about to be the one to call Patrick and remind him, especially when he’s probably already halfway back by now. My boyfriend is going out of his way to grab us an evening junk food fix, and as strong as the soda craving is, I remind myself how lucky I am he’s doing this at all.

Sometimes it still surprises even me that I, Libby Rain, managed to snag such an attentive boyfriend. How many other 22-year olds can say their significant others are willing to go on a snack run just for them? Not to mention that Patrick’s handsome, successful, kind, and basically everything I could have ever asked for. All that, of course, is secondary to the biggest draw of them all, though: Patrick is a man of God. He takes our faith seriously.

I glance over at the coffee table, where our Bible study workbooks are lying in a haphazard heap. We got back about half an hour ago, and I know I should be reviewing the lessons Pastor Ed taught us today, but there will be time for that later because right now, I have more important things to do.

With that in mind, I return my gaze to my boyfriend’s laptop on the table, my fingers flying over the keyboard as I type in his password. I found it on a sticky note in his wallet, and although it’s probably not good form to snoop, this will be worth it. At least, that’s what I’m telling myself.

Quickly, I navigate to his hard drive, half-picturing myself as a badass movie hacker. The mission? To track down baby pictures of Patrick that I can use in a birthday collage. It’ll be so awesome because I want to put together a really cute spread of him that we can view at his birthday party. All of our church friends will ooh and ah when they see his chubby cheeks and curly locks. It’s definitely a gift from the heart, and I’m sure God will forgive the intrusion of privacy.

Jackpot! Patrick’s family photo album is clearly marked, and full to the brim with exactly the kind of wholesome snaps I would expect from a guy like Patrick Arrington. Family trips to Niagara Falls, first Christmases, and play dates are all documented, and Patrick is in almost all of them. Unable to stop my smile, I click on one of them: his elementary school graduation. Even as a little kid, he had the same black hair and blue eyes, not to mention the same distant, aloof handsomeness. Standing to either side of him are his beaming parents, as well as his older brother, Frisco. Wow, Frisco was already a looker. While Patrick was only a boy in this photo, his older brother must have been in his twenties already, with a dark, brooding expression and a build that rivals an Olympic athlete.

But I’m not here to gawk at Patrick’s brother, I’m here to grab pictures of Patrick himself. As a result, I email the photo to myself and resume my search, glancing every so often at the door to make sure my boyfriend isn’t about to walk in. Ah ha! Here’s one from his first day of kindergarten, his fifth grade swim tournament, and one of his school science fairs. One by one, I copy them all before reaching the last in the series, which is more recent. It’s a picture from my twenty-first birthday dinner, which was a surprise event with both our families in attendance. Patrick has his arm around me in the booth, and I can’t help but take a minute to assess my appearance: curly brown hair that stays unkempt no matter how much I try to straighten it. Brown eyes. Curvy, with a big goofy grin and stars in my eyes. Patrick is facing forward, a faraway expression on his face. On the other side of the booth, his parents are talking animatedly with his brother.

Oh, there he is again. Frisco’s ten years older than Patrick, and I’ve never really been able to get a read on him. The age difference between us is part of it, but it’s also something else and I can’t put my finger on it. There’s a dominance in the way he carries himself that Patrick doesn’t have.

The sound of my phone ringing pulls my attention away from the photo album, and when I check it, I see that it’s Dakota calling. She probably just got home from her shift at the Blue Bean, the coffee shop that she owns. I can’t not answer, and not just because she’s my boss; Dakota Straithmore also happens to be my best friend. Not even the allure of going through Patrick’s baby pictures is enough to get me to ignore the call. Smiling, I answer the phone. “Hey, girl.”