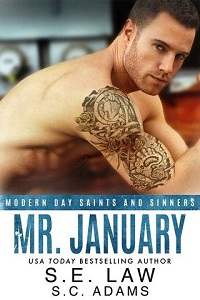 I laugh as baby Dahlia giggles loudly over the video screen. Maggie bounces Dahlia up and down on her knee and tickles her daughter’s sides, making the little girl practically scream with laughter.

“She’s so cute!” I gush for what must be the millionth time since we started chatting.

“I know, right?” my buddy asks before smooching her little girl’s cheek. “I can’t believe Dolly’s already a year old,” she adds in a fond tone. “It feels like Ed and I only got together just yesterday. Yet somehow, the proof of our love is already crawling around like a little locomotive. I swear, where has the time gone?”

I smile while doing a little finger wave at the baby. “Easy, girlfriend. Time flies by when you’re having a good time, and Ed’s been so good for you, Mags. You know that I’ve known you forever, and I’ve never seen you so happy before. I think it’s absolutely, one hundred percent your husband.”

“Well, he does give it to me good in bed,” she confesses. “Practically every night, and many mornings too. So I’m definitely satisfied on that front.”

“Steady sex will put a woman in a good mood. But come on, I know Ed’s good for you in other ways too.”

“Oh, of course. He’s such a caring and attentive husband, and he takes such good care of me and Dahlia both. I’m totally appreciative. I’m just saying the constant sex doesn’t hurt either,” my buddy adds in a wicked tone. “He always has me coming back for more.”

I laugh then because Mags deserves to be happy. After all, her marriage was something of a local scandal. Ed is the father of one of our high school classmates, and when people found out he and Maggie were seeing each other, the shit hit the fan. In fact, a Town Hall was convened to discuss the issue, but Maggie took the reins and put the kibosh on the gossip. She quit high school and married Ed, and that shut people up good. Then, our darling Dahlia was born, and no one’s heard a peep since.

But even with all the controversy, I’m a little jealous because I’d love to find a man like Maggie’s husband. After all, Ed is older, but in a silver fox kind of way. He keeps in shape, so he’s insanely handsome, with a sculpted chest and sly smile. I just wish I could get my hands on someone like that. But the most ironic part is that I have – I hooked up with Ed’s younger brother, Randy, a while back, but I never heard from that asshole afterwards! Figures. He’s a gorgeous firefighter in Cedar Toms, so I guess every woman over fifteen is after him.

But I try to be gracious.

“I’m glad to hear you’re so happy, Mags. Seriously, I adore your husband just as much as you do.”

“Well, what happened with Randy?” she asks in a quizzical tone. “Hasn’t he called?”

“I didn’t tell you this already?”

She shakes her head while bobbling Dahlia in her lap.