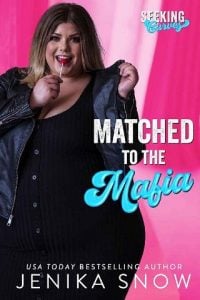 “You need a woman in your life. And children, lots of heirs.”

My mother’s words were like a broken record every time I came over for Sunday dinner.

“Do I?” I reached across the table and grabbed the bottle of red wine, poured myself a generous amount, then leaned back and stared at my younger brother, Paolo. Of course the little asshole had a smirk on his face but refused to look me in the eye. “Maybe you should urge Paolo to get with someone, Ma.” I took a hearty sip from the wine glass and heard my mother scoff.

“As Underboss, you need a wife and heir. You know this.” She grabbed her own glass and took a long sip.

My mother was the only person who dared speak to me in such a way.

My name, Enzo Santini, had enough power behind it to invoke fear just by hearing it.

Everyone else was too fucking afraid I’d slit their throat when they slept. They’d be wrong, of course. I’d slit it while they were awake and I stared into their eyes.

“Besides, your brother is too young.”

Paolo made a sound of disagreement. But I had to agree with her. At only seventeen, he barely knew his dick from his balls, let alone how to be a husband.

“Besides, you know he has to focus on learning the family business. He needs to work on building his name up within the families before he settles down.”

That’s what everyone in our circle called what we did. Who we were.

Everyone else had a few different names for us. The mafia. Cosa Nostra. The mob. Then there were a handful of other terms the media and rumors had come up with over the centuries. But they all meant the same thing, and they were all true.

But we just called ourselves The Family when we were together. Because that’s what we were—blood relatives or not, we were all connected and forever would be until we died.

Being born into a traditional Sicilian family, being brought up in the world of a crime syndicate, meant I was expected to be a certain way, be a certain person.

And after my father was killed a decade ago, I had to grow up even faster… be the head of the household, the man who took care of things and provided for his family.

And it shaped me into the man I was today.

Dangerous, violent toward offenders, wealthy beyond means, and required to fulfill certain obligations.

And one of those was getting a woman and creating a family with her… heirs to teach about the business, to mold into men who would further help the mafia, and females who would be wives and mothers to those criminals.

My mother started talking to Paolo when it was clear I wouldn’t contribute to my personal affairs and whether I would or wouldn’t get a wife.

Because the truth was I already had someone in mind.

The first time I’d seen her was when I made an appearance at one of the businesses The Family worked with.

Seeking Curves was an up-and-coming matchmaking company that catered to women, with the men being high end on the social scale. The specialty and “claim to fame” for Seeking Curves was that they guaranteed a match. With a detailed information intake from every client, they made sure to match individuals in a three-tiered system, from most compatible to least.

It was when The Family noticed how successful and popular Seeking Curves was becoming in such a short time, and with trends and statistics being followed by the men who worked with and for us, that The Family made the decision to have a hand in the company and its stocks.

So here we were, the company flourishing and gaining more momentum and popularity every day.

But because of my schedule, it had been a month since I’d been able to get back to Seeking Curves. It had been four weeks since I’d seen Bianca.

But that was going to change tomorrow. I was making a special trip to the matchmaking company’s head office.

Ever since that first day I’d set my eyes upon her, seen her sitting behind that desk going about the mundane tasks of secretarial work, I felt this hard desire slam into me, one that was foreign but consuming nonetheless.

She said “good morning” to me that day, two words I’d heard muttered by countless people in my lifetime. But when I heard her voice for the first time, I felt this dangerous desire uncoil within me.

I wasn’t accustomed to the feeling, to the sensation of wanting something so badly it was almost violent inside me.

She was an infection in my blood, and I didn’t want the cure.