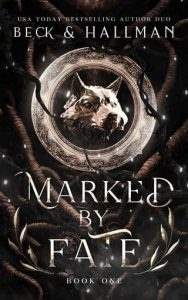 In a world where fated mates are a gift from above, I was rejected by one, and taken by another.

My fated mate rejected me, but that didn’t stop his twin brother from claiming me as his toy.
I’m nothing more than an outcast of the Star Moon pack.
For years I’ve been bullied and treated less than by my peers because I’m unable to shift into my wolf form.
Wilde forces me to face every part of myself, in ways I never imagined possible. He may not be the mate fate brought into my path… but he sees the darkness in my soul, and makes me want more of it.

**This is a dark rejected mates shifter romance and is NOT a standalone. It contains material that might be triggering to some readers.**

You’d think being the daughter of the beta of the Star Moon Pack would keep me from getting my ribs broken on the regular.

Turns out, not even that can help.

I’ve heard that before; too many times to count. It doesn’t matter how fast I am or how much I push myself to practice. Even against the younger wolves that I’m constantly training with. Even those pups are stronger, and faster, and better.

All because they can do the one single thing a wolf should be able to do: shift.

The one thing I’ve never been able to accomplish. Time. Magic. Space. None of it has helped, and I feel the absence of my wolf every single moment of every single day.

The same wolves that I train with constantly are the ones that take every opportunity they can to remind me of my failures. My rank in the pack means nothing. Even if my father wasn’t who he is, they would find a way to bruise me, break me, or humiliate me. It’s like they need to remind me of how useless I am or what a burden I am on the pack because I can’t shift yet.

Riley, the pack trainer, is waiting for me to acknowledge his useless advice. I nod, wincing as I press a hand to my side. Yes, that’s at least one broken rib moving around in a way it shouldn’t. At least I know it’ll be healed come nightfall. Tomorrow morning, at the latest. I might not be able to shift, but I still heal like a wolf.

“And what are all of you doing?” he shouts at the others, the trio I was fighting off when my ribs decided they had enough. Hannah, Christian, and Dexter exchange looks at one another, attempting to appear innocent like they didn’t mean to attack and hurt me. I could roll my eyes so hard right now. Instead, I force myself to stand upright, and they circle me like vultures.

They know they hurt me, but I don’t have to show them that. I don’t have to let my weaknesses bleed out of me like a wound that never heals. I shake off the pain, and even though every breath burns like fire, I face them without flinching.

Hannah lunges first, but she’s the slowest of the three. It isn’t a challenge to knock her on her ass with a quick toss over my hip. “Hannah!” Riley bellows. “There is no excuse for that.” Right, because I’m the pack’s weakest link. There’s no excuse for letting me have even a tiny victory.

Christian pays me back with a flurry of jabs to my already wounded side. I grit my teeth against a scream while driving an elbow into his face. The crunch of bones is beyond satisfying. He falls back with a hand over his spurting nose. A smile tugs at my lips, but I’m not done yet.

Dexter steps forward, takes me by the shoulder, and spins me before I can react. He holds me in place by wrapping an arm around my neck, an arm he tightens until my eyes bulge out of my skull. I claw at him and drive my elbow into his ribs over and over again, but it’s no use. He might as well be made of steel, which I know very well. After all, he’s been hurting me for as long as I can remember.

“I broke the right side. How about we let Hannah take care of the other side, too?” he murmurs in my ear, chuckling when I gasp for air. “I can’t have all the fun. It wouldn’t be fair.”

Right. Because anything about this is fair.

Hannah smiles nastily before delivering a vicious kick to my as-yet-uninjured left side. Not that it’s never been injured before—I don’t think there’s a bone in my body that hasn’t at least been cracked over the years. Not even my skull.

That doesn’t mean the fire that explodes in my ribs is anything I could get used to. The world goes foggy for a few seconds in the aftermath. I slump in Dexter’s arms, putting more weight on my already constricted windpipe.

I catch myself before passing out, though, and find my footing a moment before he releases me. “Too easy,” he announces to the laughter of those who stopped training to watch me get my ass kicked.

“Okay, enough.” Riley claps his hands briskly. “Back to work.” Christian and Hannah both shoot me dirty looks before returning to the group they were instructing before deciding to demonstrate their technique on me. “Dexter, the same goes for you.”

He throws a disdainful look my way. “Go to the healers, and make sure you haven’t punctured a lung.” While my bones will knit back together on their own, one or more ribs might need to be adjusted if they’re poking into my lungs. Right now, my entire torso is blazing with pain, and I can only take tiny little sips of air without it feeling like I’m being stabbed.