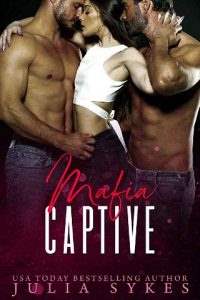 I knew I was dangerously close to crossing a line. I shouldn’t touch her: the barely legal, innocent angel who’d captivated my attention from the first moment her lovely blue eyes had met mine.

Ashlyn. She had no ties to my dark world. It was selfish and reckless for me to allow myself to get close to her.

But when she swayed toward me, as though drawn by the same magnetic pull that’d been tempting and tormenting me for weeks, she was nearly impossible to resist.

I should’ve walked away. I should’ve ignored her, rejected her. Bruising her pride now might save her from bruises marring her alabaster skin in the future.

My fists curled as the gruesome, stomach-churning image of her in pain flashed across my mind. Any association with me could put her at risk. If someone from my former life tracked me down, she’d be targeted to draw me out. To punish me.

I’d ached to claim the gorgeous, curvy brunette ever since she’d peeked up at me from across the dingy bar where I worked. The place was a dive, but college students didn’t come here for pretentious cocktails; the owner didn’t care if his customers were underage, and he didn’t mind paying me cash under the table. I’d chosen this job because it allowed me anonymity. There was no official record of my employment, no digital trail to betray my location. No one could find me here. Not my brutal allies or my sadistic enemies.

If I were a good man, I’d spare Ashlyn from the taint of my gritty world; a world someone like her—with her pretty, charmed life—would never understand.

I’d resolved to put that world in my past, but that didn’t mean it couldn’t catch up to me at any time. I was on the run, most likely being hunted by my so-called family.

They were the least of my worries. If my family’s enemies caught up to me, anyone close to me would be in danger.

I didn’t want that for Ashlyn. But every time she stepped into the bar, my hunger for her grew sharper. She was stunning, but it wasn’t simply her beauty that entranced me. During our brief encounters, her cheeks flushed the prettiest shade of pink, and her long lashes lowered to hide the desire that darkened her eyes.

She was soft, sweet, and shy—all the feminine qualities that called to the most perverse aspects of my nature.

Back home, I was used to getting what I wanted. My family had more money than we could ever possibly spend, and women were eager to fall into my bed. They were drawn to my wealth and my power.

That’d never bothered me before. I’d never really thought about it at all.

Until Ashlyn looked at me with raw desire. Me. Not an obscenely rich heir who might shower her with expensive gifts. Ashlyn didn’t have any ulterior motive for wanting me. This was simple, animal attraction. It was a tempting glimpse at the life I craved: one that was entirely ordinary, untouched by violence and vicious power plays.

A life where I didn’t have innocent blood on my hands.

But even as I entertained the impossible fantasy of dating her like I was a normal man with an unremarkable past, I knew there was nothing ordinary about the intensity of our connection. This kind of burning, consuming chemistry was rare. Stronger than anything I’d ever felt before.

Over the long weeks of self-denial, she’d become so much more than a beautiful woman I desperately wanted to claim. I’d placed her on a pedestal in my mind: the perfect, sweet angel with the perfect, sweet life. I envied her and craved her at the same time. If I could touch her, taste her, I might be able to pretend that kind of life could be mine, just for a moment.

I knew I was poison to her, but I wasn’t sure how much longer I could restrain my darkest, hungriest impulses.

My stomach did a funny little flip when his eyes met mine. Although the bar was crowded with intoxicated students, the cacophony of feminine laughter and hip-hop music faded away. The phenomenon was familiar, and I found it addictive. I found these moments with him addictive. His cocky, crooked smile made my heart race and my blood heat.

I leaned on the bar that separated me from Joseph, my body swaying toward his without conscious thought. We’d only ever exchanged the briefest physical contact when he pressed free drinks into my hand, his long fingers brushing against mine.

I was crushing hard on the breathtaking bartender, but so were most of the women who frequented the dive bar where it was easy to get served underage. While I wasn’t usually one to bat my lashes and flirt my way into free drinks, the connection I felt to Joseph was electric. I wasn’t intentionally acting coy; I simply couldn’t resist the chemistry between us.