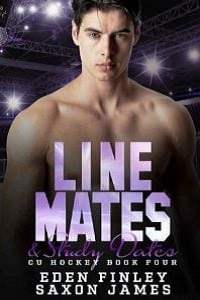 I’m going to go do something stupid.

Those were the words I said right before I followed through and overshot it. Because I didn’t do something stupid last night. I did something fundamentally messed up.

The heavy weight spooning me shifts, and I close my eyes and mutter silently, “There’s no place like home. There’s no place like home.” Except there’s a gigantically big, huge, stupid problem with that. This is my home. It’s Ezra-fucking-Palaszczuk who needs to get out of my bed and this house before any of my little brothers and sisters see him in here with me. Or worse yet, if my older brother sees him.

I elbow Ezra and whisper, “You need to go.”

The deep moan in my ear was sexy last night when I was drunk, but now it makes me cringe. Not because he’s a dude but because of who he is. “Come on, I thought we could have some more fun before you kicked me out.”

“My brother will kill you.”

“Westly? Please, he never stays mad at me long. He loves me.”

I know. That’s why I fucked Ezra in the first place.

Alcohol is an evil mistress. It takes those devious “what ifs” and turns them into reality. Sleeping with my brother’s best friend should have been reserved for when West really pissed me off. Instead, on a drunken whim, I thought fooling around with Boston’s hottest defenseman was a brilliant idea.

No one has ever accused hockey players of being smart. Even I know this is crossing a line.

Which yeah, I would have been prepared to do when I really wanted a reaction, but for once, this wasn’t one of those times.

Why, why, why did Ezra come visit my brother while I was all … I shudder, vulnerable? Eww, that’s gross. Go away, you useless emotion.

Ezra runs his big hand down my chest, and I elbow him again.

“Fine.” He stands and pulls on his sweats, but he only gets them up to his thighs when footsteps thump down the stairs and my bedroom door slides open. I use the term “bedroom” loosely because it’s actually the basement of our parents’ old clapboard house. It’s dark and freezing, and the makeshift sliding door West installed for “my privacy” doesn’t have a lock, but unless I wanted to share with one of my siblings, it was this or camping in the damn yard.

“Asher, you have to—” West’s voice cuts off when he sees Ezra pulling up his goddamn pants. My brother’s hardened gaze turns to me, ire filling his green eyes that match mine.

I don’t even know where my hostility comes from half the time. It could be a number of things. The top of the list would be losing our father and stepmother in a car accident a year ago and West guilting me into giving up my spot in the NHL to help him raise our siblings. He said he needed help and didn’t want to hire a nanny, that he didn’t want to uproot the kids’ lives more than they already had been after losing our parents. West gave me the choice, of course, but it didn’t feel like much of one. I wasn’t going to leave them in the sole hands of Westly Dalton. Yeah, there’s a part of me that wants to escape, but another part has the obligation to stay. If West can give up his career in the NHL for them, I can postpone mine.

Maybe Buffalo will still want me when I graduate from college, and maybe they won’t, but by then my draft contract with four-year exclusive rights to Buffalo will be over, and I can try my hand as a free agent.

Until then, my life is no longer just mine but also West’s, Zoe’s, Rhys’s, Hazel’s, Bennett’s, and Emmett’s.

Okay, maybe I do know the source of my hostility, after all, but that doesn’t change anything.

Acknowledging I’m being an irrational shithead doesn’t make me stop being one. It’s impossible to rein in the asshole inside me. I’ve given up trying.

West folds his arms across his wide chest and avoids looking at me as he says to Ezra, “Now you’ve gotten what you wanted, you can go back to Boston.” Then he turns in my direction. “You need to take Hazel, Bennett, and Emmett to hockey practice.” He spins on his heel and leaves the room.

That’s it? That’s all I get for screwing his ex-teammate? I don’t know whether to be pissed off or scared.

When West is angry, he yells. Our screaming matches over the years have been the definition of sibling rivalry. But ever since Dad died, he doesn’t give a shit about fighting. Either that or he’s holding it all inside and will one day explode.

I turn to Ezra. “What did he mean you got what you wanted?”