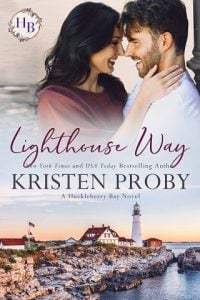 We found the coolest thing today! Sarah, June, and I were in the lighthouse, in our secret place, and the floorboard creaked. June was able to pry it up. There was a diary inside! A really, really old one that starts in 1871. So, it inspired the three of us to start diaries, too. And what better day to start than the first day of a new millennium?

So far, we’ve only read the first entry. We decided that we would read one at a time, and we all have to be together when we do. Today’s was sad. The woman who wrote it, Rose, talks about how she misses her man. He set sail and promised to be home in three months, but he’s been gone for almost a year. She sounded so heartbroken.

I guess they couldn’t just call each other way back in the olden times.

I said it reminded me of one of the romance novels I just read. Of course, I have to hide those from my mom. She’d say thirteen isn’t old enough to read those books, but they’re so good!

Anyway, the diary is totally awesome. We put it safely back in its hiding spot so we can just pull it out and read it whenever we’re up in the lighthouse. It’s been really rainy and stormy lately, so we haven’t been up there very much. Dad says it’s too dangerous. But when we get a break in the weather, we’ll go back up and read some more.

I wonder if Rose is the ghost I see here sometimes. I see her up on what Dad calls the widow’s walk, and other times, I feel her next to me like she’s trying to tell me something. Once when I felt her, I saw that Wolfe was up in a tree, and he almost fell. It was so weird! But I’m not scared of her. I have to live here, at the lighthouse, with my parents, so it’s good that she doesn’t scare me. That would suck.

Okay, I think that’s enough for my first entry. I’ll write more when there’s something good to talk about. I can’t wait to read more of Rose’s diary!

“It’s my distinct pleasure to introduce a man who needs no introduction at all,” Mayor Rebecca Schlinger says with a wide grin as she looks over at me. “Our own hometown pride and joy, Wolfe Conrad!”

It seems that all two thousand and nine citizens of Huckleberry Bay are in the crowd, cheering and waving their arms and flags as I take the stage and smile out at them.

It’s the Fourth of July Festival in my hometown of Huckleberry Bay, and I’m here as a celebrity guest—and to drive in the dirt races for charity.

I’m used to loud crowds and exuberant fans, but this hits a little differently. Okay, a lot differently.

Because this is home, and the crowd cheering right now is full of friends and people I’ve known for most of my life. I lit out of here as fast as I could after high school, obsessed with cars and driving fast. Hell, I haven’t even been back home since my parents died almost two years ago, within months of each other. My dad died from cancer, and my mom passed from what I’m sure was a broken heart.

Yet, still, the people here are proud of me.

And there’s nothing like the Oregon coast in the summertime.

“Thank you,” I call out into the microphone, and the crowd starts to quiet so they can hear me. “It’s always good to be home, and I’m glad I could be here for this. You know, when I was a kid, this festival was my favorite time of year. We’re going to put on an exciting race for you all today and raise some money for the local food bank while we’re at it.”

I let my gaze skim over the familiar faces, pausing when I see Luna Winchester. I lift a brow at her, and she smiles.

It’s been a lot longer than two years since I saw Luna.

I send her a wink and then get back to the task at hand.

Racing. My lifeblood. It’s always a thrill to drive, but doing it in my hometown? Well, there’s an added layer of adrenaline in that mix.

“I hope I see some familiar faces tonight at the pub crawl.”

The famous pub crawl in a town the size of Huckleberry Bay consists of roughly three bars, but it’ll be fun to unwind after the race.

I hurry down the steps at the side of the stage to where my best friend, Zeke, is waiting.

“Why don’t we come here more often?” he asks as we hurry toward the track. I slip my sunglasses onto my face and try to ignore the unfamiliar nervousness that’s set up residence in my stomach.