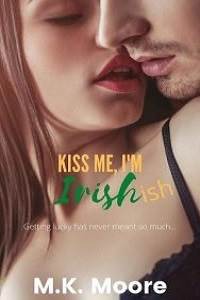 After working a double shift, a noisy, crowded pub is the very last place I want to be. It’s also hot as hell in here, and I am not dressed for this. The stupid hat they gave me looks awful, but I'm team player. Thank God I left my suit jacket in the car.

Some buddies from the hospital where I am the Chief of Emergency Medicine, essentially their boss, decided I needed a drink and to get laid in that order. I concede that a drink would be nice, but what they don’t know is that I don’t do casual sex or relationships, for that matter. The woman I sleep with will be the first, last and only. I am forty years old and a busy doctor at MassGen; I don’t have time for games or something fleeting.

Coming from Columbia at fourteen, the summer before high school, was the easy part. My parents worked two, sometimes three jobs, to afford college for my little sister and me. In return, I worked my ass off to become a U.S. citizen and graduate from college and then med school. I take care of them now. It’s the least I can do. They sacrificed everything to come here, to give me a better life. My parents had me young, in their early teens. I was twenty before Sophia came along. We succeeded because they did. Because of the driving need to pay them back somehow, women weren’t high on my radar. Also, the example of my parent’s marriage made me see what I want in life, and other than prom night, I’ve held out hope for that.

Besides, once I got to college, I was so fucking busy; dating was the furthest thing from my mind. I can see why the guys think I might need this, but they’re wrong. I could have had a beer at home. Instead, I am hanging out in the corner of a pub because it’s so packed with people you can’t even move.

Dropkick Murphy’s, I’m Shipping Up To Boston, fills the small room. It’s literally just a long bar, a bunch of tables, and a small stage. There is a DJ up there now, but I’ve been here on quieter nights, and they have live bands. My Guinness has gone warm, and all of the waitresses I’ve signaled are too busy to come over into the corner I’m standing in. Finally, I spot a waitress headed this way.

My mouth drops open. MINE, I chant in my head, in English and Spanish. I am not entirely sure I don’t say it out loud, but I am too far gone to care. I stare at her like a man possessed. She’s every man’s fantasy, but there is something so innocent about her. I’ve never seen her here before.

She’s got long dark hair braided into pigtails. One is tied with an orange ribbon, the other dark green. She’s wearing cut-off denim shorts with shamrocks painted on them, a dark green tank top with “Lucky Leprechaun Pub” emblazoned on it, along with their logo of a leprechaun guarding a pot of gold. Her green chucks have orange laces. She looks both sexy and comfortable. She’s not wearing a stitch of makeup. She’s carrying a large tray of corned beef and cabbage plates, not paying attention to where she’s going. She trips. Without thinking, I surge forward, catching both the tray with my outstretched arm and her against my chest. Up close, her eyes are the brightest blue I’ve ever seen. I could get lost in them.

“Oh, my gosh! I’m so sorry, sir!” she exclaims. Her sultry voice goes all through me. It’s pouty, just like her parted crimson lips. I have the strongest desire to lean down and bite them, but somehow I refrain. She’s fucking gorgeous.

“Oh no. My name is Raven,” she says. Her voice is more like velvet now. My cock is so hard it could easily punch a hole through my slacks.

“Raven,” I say, testing her name on my tongue.

“Can I help you, sir?” she says, her cheeks flushing. It could be from the heat in the room, but I doubt it. Her little thighs are rubbing together.