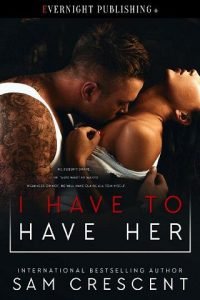 “It’ll only be for a few days, I promise. And then everything will be fine. I mean, it will probably be longer than a few days. That asshole she was with took the car and all of her belongings, and even got her fired from her job for making a scene. He hit her too. You should see it, it’s really bad. So please, please, please, Gabriel, can she stay?”

Gabriel Locke half-listened to his sister over the phone as he stared at the man who’d tried to steal from his casino. Not that he himself needed the money, but still, he couldn’t have anyone stealing from him.

“If you don’t do this, I will be the biggest royal pain in your ass.”

“I haven’t seen this girl since she was eighteen. I don’t know what kind of influence she has on you.”

“That was years ago, and I told you all the time, I’m the one who convinced her to go out to parties with me. Not her. You’re being unreasonable. Why am I not surprised? I should have known you’d react this way. It’s what you always do. You just react without being given all the facts.”

If he didn’t nip this in the bud, he was going to hear this all day. With prolonged nagging, Rhianna’s voice was like nails down a chalkboard.

“Fine, but only for a couple of days. Don’t push me on this.” He hung up the phone to the sound of her squealing. At least she was happy, which was more than he could say about this man in front of him.

After rolling up the sleeves of his jacket, he cracked his knuckles and his fist flew across the bastard’s face. He repeated this four more times.

Stepping back, he admired his handiwork. He needed a bit of blood, the pain that dug into his knuckles. He didn’t like people who tried to steal from him. He’d built up this casino along with the six more he owned, as well as his strip clubs, and a couple of other illegal businesses on the side.

No one fucked with him because he hit right back. This was who he was. He’d built up his reputation and his businesses on pain and fear. The only weakness he had was his little sister and he made sure she was covered with plenty of protection at all times. Their parents were gone, killed years ago in a shootout at a diner. They’d been unlucky and Rhianna had been home, sulking over something.

He knew she felt personally responsible for their parents’ deaths. If she hadn’t been arguing with them, they would’ve gone to a different restaurant. No matter how many times he told her it wasn’t her fault, she still blamed herself.

Grabbing his gun, he pressed it to the thief’s temple. The man whimpered at the cruelty of it all. Gabriel took no prisoners and without a second’s remorse, he fired his weapon. The shot echoed around the basement.

His work complete, he ordered the disposal of the body, put his jacket back in place, smoothing out any wrinkles, and left, heading back up to the main casino party. Stepping out onto the balcony, he was the king, overlooking his empire. Men and women were all throwing their money away. All taking a chance on what could be. Could they double, triple, or quadruple their money? The temptation clawed at them.

Of course, he had distractions. Men and women dressed to impress and gain their focus. Sex and money.

He’d come to learn everything had a price. Even women who played hard to get, who thought you wanted the chase. Several of his waitresses had tried to seduce him, but he didn’t fuck where he worked. He had women who knew the score and if he dialed, they’d be waiting. He didn’t do love or relationships.

Dirty and fucking incredible. He couldn’t be done with a prim and proper woman who needed to be coaxed to touch herself. He liked wet, willing, begging, desperate women. Some of these men tonight would take one of the waitresses to bed and fuck them into oblivion.

He smiled. This was his hard work paying off.

Now it was time to move on. On a Friday night, he always liked to make an entrance at several of his establishments. He left the balcony, aware of the men following him. His own personal bodyguards. Paying for the best, he got his men’s loyalty, and he only took men who were the hardest motherfuckers in town. He didn’t care if they punched first and asked questions later. This life was hard and it was fucking dangerous.

His car was already waiting outside. Pulling out his cell phone, he checked to see if his lawyer had been in touch about a property he wanted to acquire. For the past couple of months, the owners hadn’t wanted to sell it to a company, and so he’d changed tactics and made it a more personal venture. They didn’t need to know he intended to strip their home down and build it as an exclusive sex club.