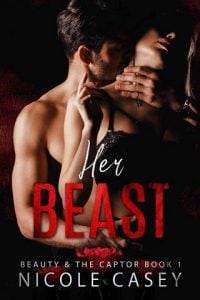 I acknowledged to myself as Senor Ruiz came to retrieve his latest acquisition. But I wasn’t proud. Marcos was proud; it was clear by the way his eyes glowed with approval. He patted me on the back as the other man took hold of the lead and led the product of weeks of mind-bending work out of the room.

“This one was important, and I knew you wouldn’t let me down, son,” Marcos congratulated me as he motioned for a servant from across the room. “You never fail to impress me.”

The servant appeared at his side seconds later, holding open a box of Cuban cigars. Marcos selected two from the box and handed me one before striking a match to light mine and then his own. I inhaled deeply, savoring the familiar taste of a victory cigar. The earthy, tobacco flavor slid across my tongue as the pungent smoke perfumed the air.

As I’d grown into the life that had been laid out for me, I’d come to view Marcos in some shady area between friend and father. I remembered waiting for moments like these, anxious for my hard work to amount to something in his eyes. Years later, there was none of that eagerness now, but a quiet hum of satisfaction nonetheless.

As Senor Ruiz made his way down the long hall, I couldn’t help but watch the symbol of my success. Her hips swayed as she crawled gracefully down the hall, her head down and her body naked except for the leather collar around her slim neck. She hesitated for just a moment as she reached the door, and I felt the familiar tightening in my gut. She’d performed flawlessly for the past two weeks, and I hoped she wasn’t reverting to old habits. But with a swift tug on the leash attached to her collar, she crawled out the door, and I lost sight of her.

Yes, I’d done a good job. The girl had been stubborn and prideful the day she’d been brought to me, but not anymore. Now, she would make an ideal slave for her new master. I breathed a sigh of relief. It wasn’t only the embarrassment of her slipping up that had worried me, but rather, after so long working with this one, I’d long since tired of her. I was ready for a new challenge, something that would send more than an innate sizzle of arousal through my veins.

It wouldn’t last long. It never did. One slave was no different from the next, even in the early days before they were conditioned for sale. They fought and they pleaded, but quickly they gave up the fight, allowing me to mold them into precisely what they needed to be.

“You were built to command, my son,” Marcos said, drawing my attention back.

I wasn’t built for this, some part of me wanted to shout. But the truth of the matter was…I was. I’d watched the other men working with the slaves for years, and not even the most experienced of them had acquired complete domination over a spineless, young girl in the time it had taken me to turn the obstinate daughter of Marcos’ biggest rival into an adept slave.

“And in celebration of your success, I have a surprise for you,” he continued, draping his arm around my shoulder and leading me down the hall to his office.

I didn’t like surprises. Surprises meant unexpected, and I liked to know what to expect. Still, I confess I was mildly curious. Marcos’ body seemed to be thrumming with anticipation.

Once inside his office, he placed a file folder down on the desk and motioned for me to take it. Another job? Another slave? This wasn’t my idea of a surprise, but I opened up the folder to see what was inside. And then I saw the photo lying on top of a neat stack of papers. My stomach clenched and my rusted heart thudded heavily in my chest. It was him—the man who had taken everything from me. James Donovan.

“Where is he, Marcos?” I was no longer tired. I was primed, ready. An old rage pulsed through my veins and my fingers shook with impatience. I could feel the cold steel of the Glock in my hand, hear the grind of steel against steel as I cocked it. I could even envision Donovan’s face in that split second before the bullet tore through his body. I’d longed for this moment and I’d waited for so long.

“No? What do you mean no?” Why the hell was he dangling the man in front of me just to deprive me of the vengeance that was, by right, mine?

“I mean, I am not going to let you rush into this hastily. It will be over too quick, and you’ll be left with nothing but the bitter taste of disappointment. Your revenge cannot be swift.”