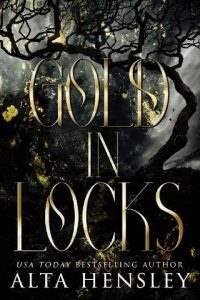 She trespassed into our world, innocent and vulnerable.
She doesn’t belong here, but that won’t stop us from claiming her.
We will lock her away in our mountain cabin, hidden deep in the forest.
She’ll be compelled to obey and serve our darkest desires.
Our beautiful golden-haired captive will learn to love the chains which bind her to us.

Three brothers, each more beastly than the last.
There will be no escape from this twisted fairytale.
For there are three villains in this story.
And in this ending… she is ours.

*This is a standalone, Why Choose, Dark Romance. Proceed with caution with this fairytale because there isn’t just one villain… there are three.

Standing in the shadows, my brothers and I watched as the flames leapt from the lodge on the mountain side to lick at the sky. I couldn’t help but think that fire was the ultimate cleanser. Tremendous heat consumed all in its path—nature’s way of wiping the slate clean. This was the last of it—this fucking house the bastard called home, the epicenter of his entire empire.

Flames had been our weapon to destroy all we could of Cook Blackstone’s world.

If I had my way, however, every man who worked for his syndicate would be turned to ash. And Cook sure as hell would be frying to a crisp in that burning house of his as well. Instead, he was off in some unknown location allowing the dust to settle. He knew the Barrett Brothers were out for blood, and he was too much of a coward to face us head on.

It hadn’t been hard to find the location of Blackstone’s house. Nothing a little Barrett torture couldn’t handle. My brothers and I had been impressed with the level of loyalty and commitment one of Blackstone’s men had displayed. Usually we could have our victims squealing within fifteen minutes, but this time it took us removing every single fingernail and toenail before the fucker began to crack. And even then, we had to remove most of his toes before he truly gave us everything we needed.

When the roof caved in, the crash muffled by the roar of the fire, my brother Banks said, “That’s the last of it. I think we have successfully burnt down everything that man has built or owned on the land neighboring ours.”

“He’s going to know it’s us,” our younger brother, Jay, said. “It’s just a matter of time until he comes to hunt us down.”

“I’d rather die a torturous death at the hands of one of his mountain hillbillies than allow him to get away with killing our parents. Our revenge is still not over. Not until we get to stand over his body and watch it burn like we watched all his property become nothing but ash and smoke,” Jay announced between clenched teeth. Always the Barrett brother with the fiercest temper, and the brother feared the most.

I glanced at Jay’s fists balled at his sides, knowing there was a beast inside of him still unleashed to the fullest.

Yes, we were the Barrett Brothers.

Raised to protect our land at all costs.

No trespassing is not just a sign in our world. It’s a way of living and one we will defend to the death.

The mountain has made us tough, feral, almost animalistic.

The death of our parents gave us vengeful souls, killer hearts, and a primal thirst for blood.

The sounds of sirens in the distance had me looking at the burning house again. “We need to get out of here,” I said, and I wasn’t just talking about the property we stood on.

My brothers knew and agreed. We had discussed it at length, but the time had come. It was time for us to leave society as we knew it. The turf war between the Barretts and the Blackstones had grown to gruesome and epic proportions. We had lost our father—the head of our family—and our lovely mother as casualties. We had also lost many a fellow man in the fight. And as much as I hated to fucking admit it, with my father’s death, the Blackstones grew stronger while we grieved. There wasn’t much left of our family empire, and my brothers and I were over the opium and marijuana business. We had something far more important to consider now… our sister’s safety. She was the only good we had left in our lives right now. The only light in our darkness.

“Where’s Kit?” Jay asked, clearly thinking of our sister as well. “She’s in more danger now than ever, and we can’t leave her alone for even a second until we leave.”

“Where the fuck do you think she is?” I said with a shake of my head.

“You told her to stay away from that damn place,” Banks said, his attention remaining on the crumbling and burning structure.

“I did,” I admitted. “But she has some odd fascination with that store. She likes all the magic charms and stuff. Fuck if I know.”

“Well then, enough’s enough,” Jay announced. “Let’s get our sister and get the fuck out of here before the Barrett name becomes extinct.” He turned to look at me. “Where is this magic shop you say she’s always at?”

Stepping away from the destruction we’d created, we moved through the darkening forest to where we’d left our truck. I knew it would be the last time I drove these dirt roads on property that didn’t belong to us. I’d fought this war since being born into this family. For what? To become so filled with hate and vengeance my jaw continually throbbed due to clenching my teeth? To lose my parents? To lose friends and even more family with the deaths of many of my cousins? It was a war I’d never win, and I knew this now. My brothers knew this. All that was left was carnage.