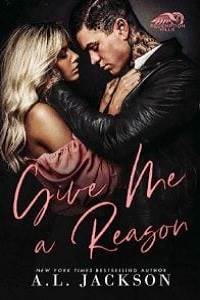 It was just before ten when I eased my bike into the packed parking lot at the front of the club.

Darkness had long descended on the small city of Redemption Hills, California. The sky above was nothing but a blanket of black. Against it, the neon lights gleamed and glowed from the two-story building like beacons of debauchery, flashing over the slew of cars and bikes lined in a row near the entrance.

I stopped at the front and planted my boots on the ground so I could roll my bike back. Killing the rumbling engine, I kicked the stand and swung off. The glow of club lights and the sound of heavy music seeped through the thick block walls.

I lit a smoke and strode for the entrance, my boots crunching on the loose gravel as I went.

“Mr. Lawson.” Kult dipped his head as I approached.

Awareness rustled through the bodies standing at the door to get inside as I advanced on the crowd.

“Kult,” I returned as I came up beside him.

“How are you tonight, Sir?”

Kult was a bouncer who’d been working for me for the last four years. Intimidating as fuck. Loyal to the bone. Exactly what was required.

Stamping out my cigarette with the toe of my boot, I scanned the scene. “All quiet tonight?”

“Way I like it,” I said, gaze sweeping the faces of those who’d turned to stare at me. Like every person there had taken note of my presence. Every eye compelled to look my direction.

My father had always said respect wasn’t earned, it was taken.

You had to own it.

As much as I’d despised the pig, he’d at least had that one thing right.

Proof of it was in the way every person had shifted. Now on edge. A shot of self-preservation injected into their bloodstreams.

Like they’d felt the rumble of the earth vibrating beneath the approach of my bike.

Felt the shift in the sordid, stagnant air.

I always found it ironic that they all seemed desperate for the promise made by the blue neon sign hanging from the front of the building.

Absolution from whatever sins they were running from.

Absolution from any choices they might make that night.

Absolution from feeling anything at all except for pleasure.

Still, they gaped at me like even in the midst of their thirst for indulgence, they felt wickedness in their presence.

They wouldn’t be wrong.

“At capacity?” I asked. There were at least twenty people in line, but I made it a habit to know everything going down in my club.

“Always is.” He cracked a bearded grin.

I lifted my chin in parting before I wound behind him so I could slip through the double doors and into the dingy glow of the bar. Music blared through the speakers and reverberated along the floors. It set up the vibe in anticipation of the band that would be taking the stage in about an hour.

Absolution was this cross between luxe and dive.

Fuckin’ kick-ass bands and the best drinks in the small, trendy mountain city that was tucked in the most northeastern corner of California.

A biker bar that had the rest of Redemption Hills flocking in droves for a chance to dip their toes into the danger they could feel seeping from the walls and still be able to walk away from it in the morning without feeling an ounce of guilt.

I edged deeper into the belly of my bar.

Place I’d built from the ground up with a little help from my brothers.

My attention swept the enormous room. The lights hanging from the cavernous ceiling were dimmed. Mood rowdy.

The bottom floor was surrounded by booths that lined the walls, tables and couches in the open space, and the stage and dance floor were to the far right.

The upper floor was home to pool tables and a second bar, and it wrapped around like a horseshoe, creating a balcony that was open in the middle to give a view of the stage.

I headed for the long matte black bar that ran the far wall on the main floor.

The floating shelves on the back wall were welded steel and glass, the rows of bottles running top to bottom cast in a glow of blue neon lights.

I wound through the couples snuggled on the couches and a few groups of college boys who were clearly out looking for a taste of the wild side.

Sage was behind the bar. He lifted his chin in welcome when he saw me coming. His dark tattoos looked like seething demons writhing across his even darker skin. Dude looked about as menacing as they came except for the grin that cracked his face.

“Yo, Trent. About time you decided to show your lazy ass.”

He was all cocky smiles as he poured me my regular. I slipped onto the stool in front of him, and he slid the glass my direction.