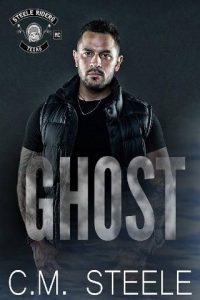 “Martinez, the boss wants to see you,” Ferguson said, smiling from his perch behind the front desk. He hated me, which made me laugh. We had a difference of opinions on things: I thought he was a big fucking pussy, and well, he didn’t like it.

“Good morning to you, Fergie.” I tossed him a wink, tipping my cowboy hat to the asshole. He couldn’t even wait until I officially clocked in to tell me that I was in trouble. I tossed my hat onto my desk, then walked to the boss’s office.

Rapping my knuckles on his open door frame, I stuck my head in and asked, “You needed me, sir?”

“Please come into my office, Rico.” He waved his hand for me to close the door. As soon as it clicked shut, he motioned to the chair in front of his desk. “Have a seat.”

I looked around the room for IA people leaning up against the walls waiting to nail me for some infraction, but it was just the two of us. I hated Internal Affairs. Those fuckers never got the guys they needed to bust for shit.

I’d been with the ATF for five years since leaving the Special Forces. It was a gig I’d been made for, and most of the time I loved it. Lately, though, I’d become restless, wanting something else. Maybe it was that my friends were finding love around me or that the cartels were more trouble than I cared to handle, but I felt my time in this game was coming to an end. Perhaps he sensed my disenchantment.

I sat in front of his desk with my fingers intertwined and steepled, waiting for the hammer to drop.

He rested his arms on his desk, lacing his fingers. “So how’s it going with your assignment?” he asked with a huff.

I’d been working to nail the Cortes Cartel that ran through Texas, but they were well armed and enforced. They trafficked women and drugs throughout the States, and the US government wanted to put an end to their supply chain.

We all knew that if you snuffed out one cartel another would pop up, but saving as many lives as possible was all that mattered. “Meh. I don’t have any new information on the cartel just yet, but they’re definitely trying to spread their wings into new areas.”

He tilted his head and pursed his lips, cocking his brow like a smug motherfucker. “Like Steeleville?”

“Yes.” So he was aware of more than he let on. My friends and I had a motorcycle club that was about protecting and making a community in Steeleville, Texas, a town that had been created by the Steele brothers who happened to be the President and VP of the Steele Riders MC.

“Is something wrong?” My tone was acerbic as I lost patience for his pussyfooting. He needed to get to the point because I wasn’t in the mood to play a guessing game with the old bastard. I had a couple of informants to speak with who would run off if I was late.

From the look in his eyes, he was serious about the assignment. Thrusting my fingers through my thick black hair, I blew out a harsh breath. “Where?”

“In McAllen. It’s with the Villanueva Cartel. We already have an agent on the inside, but he’s not getting far with them.”

I found it rather odd that they’d want two different sets of undercover teams in the same place. People tended to get suspicious if we spoke to each other. Before you knew it, your cover and the damn operation were blown. You’d be lucky to get out alive. The last one had been close for a group of our guys. Only one agent died, but it had been one too many.

“And when do I need to report?” With everything going nuts in Steeleville, leaving seemed counterproductive and foolish. However, if we got one cartel’s tendrils out of the area, then maybe the others would back off. I doubted it, to be honest, but I had to trust that my brothers would be fine without me.

“The day after Christmas. You’ll need to be in the town for a bit before you can work your way in. Understood?” I nodded. It was smart to ingratiate myself with the town and get my name out there before I approached them.

“Your packet and residence are already being prepared as we speak. Remember, keep us informed—and if it gets too dangerous, don’t hesitate to pull out.” I nodded, so he continued with the rest of the plan.