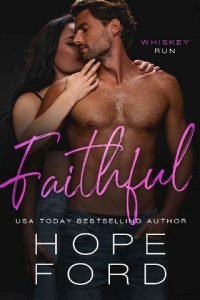 What did I ever see in him? I ask myself as I stare through my office window out into the store. Mike Miller, my ex-boyfriend, keeps making faces at me through the window as if we’re still friends or something. But we’re not. I’m definitely not stupid enough to put myself in that position. Well, not twice anyway. I learned my lesson the first time.

Mike comes to stand in my doorway and stares at me with a big smirk on his face. “What you doing, Millie Moo?”

I cringe at the nickname. At one time, I thought it was sweet, the way he always seemed to say it with affection as he would wrap his arms around me. But now, not so much. Not since I discovered that he was only dating me to get the manager’s position at my father’s store and the fact that Millie Moo wasn’t really a term of endearment. He was making fun of my plus size figure.

The Whiskey Run Farmer’s Co-op is owned by my father. I’m the office manager, and my dad has been looking for a store manager for some time now. He’s wanted to retire for a while, and there’s no doubt the man deserves it. He raised me pretty much on his own since my mother left town when I was young. His whole life has been me, our ranch, and the co-op. Now he wants to spend more time on his ranch, and there’s no way I’m going to mess that up for him. I can put up with an ex-boyfriend if it means my dad gets a break.

“What do you want, Mike?” I ask him, unable to keep the disgust out of my voice. I’ve really tried to be nice to him since everything happened, but to say it’s hard is an understatement. If my dad knew what kind of man Mike is – a two timing, using cheater – there’s no way he would have promoted him. But I’m between a rock and a hard place, and I chose the option that seemed like it would be better for my dad, even though I’ve second-guessed myself a thousand times since making the decision.

“I was thinking that if you ever decide you want something scratched – I’ll take one for the team – I’ll scratch your itch.” He finishes his asinine statement with a wiggle of his eyebrows, and I roll my eyes at him. Thank God I never slept with him. If I had I probably never would have forgiven myself. Luckily, I figured out exactly what kind of man he was before I gave in.

“That’s never going to happen, Mike, so like I’ve told you before, if you don’t have anything to talk to me about work, then don’t talk to me at all.”

I spin my chair away from him and act as if I’m digging for something in the file cabinet. I’ve learned the best way to get rid of Mike is to ignore him. He can’t stand that.

I keep digging, and when I don’t hear him anymore, I assume he’s given up and walked away. That is until I hear a soft knock on my door. Already fed up and frustrated, I bark out, “What Mike? What do you want?” as I turn to face the door.

With my mouth hanging open, my dad looks at me with a grim look on his face. “Hey, honey.”

“Hey, Dad,” I say and bolt up from my chair. I’ve done my best to hide my true feelings about Mike from my dad, but too many more outbursts like that one, he’s not going to believe it.

“Millie,” he starts, and I hold my hands up because I know exactly where this conversation is going.

He’s shaking his head and walks farther into my office. “I know it has to be hard to work with an ex-boyfriend. All you have to do is say the word and he’s gone.”

I stare back at him, and it’s on the very tip of my tongue to admit what truly happened with Mike and me. There’s no doubt if my dad knew the truth, Mike would be gone. But just as I’m about to say it, I remember everything my dad has sacrificed for me, and my lips slam shut while I shake my head side to side.