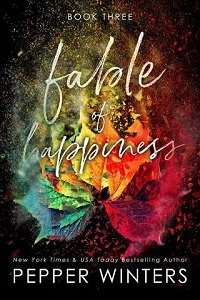 STICKS AND STONES MIGHT BREAK my bones, but words will never hurt me.

I’d first heard that chant from Wes a few weeks into our captivity. He’d whisper it in bed, hidden in the dark, his voice barely audible in the heavy silence. I’d follow along, repeating it silently in my mind, changing the words to fit my current level of hell.

Cuffs and chains might steal my freedom, but they will never own me.

Some nights, I’d twist the chant into whatever nightmare I’d lived through that day. I’d ball my hands and hiss at the night, trembling with pain and rage. Sometimes they’d rhyme, sometimes they wouldn’t. Sometimes other Fable kids would join in, but most of the time, it was just Wes and me, muttering the words like a vow of retribution.

It was one of the many things we turned to in order to survive.

A way of reminding ourselves that this couldn’t last forever.

Either death or escape would eventually save us, and I built my entire existence on those two possibilities. Even while living alone, I still trusted in those two inevitabilities.

A trespassing girl with a heart of fucking gold who showed me a third possibility.

One that successfully shattered me into irreparable pieces.

It wasn’t physical or mental abuse that destroyed me but her.

Her selflessness and her strength.

Her drive to save me from myself.

She pushed me until I cracked.

Perhaps I’d die striving to be worthy of her.

Or maybe...maybe I’d finally find a way to live.

Kindness and kisses might’ve destroyed me, but she...she might finally set me free.

I twisted my arm, trying to get free of the bastard’s grip.

His fingers merely tightened, digging into my flesh, keeping me well and truly trapped at his side. His strange, bi-colored eyes scanned me up and down even as his question hovered in the air. Licking his lips, he repeated himself, his voice scratchy and too-loud in the night. “Who the hell are you?”

I kicked out, aiming for his knee. “Someone who doesn’t take kindly to being held against her will.” My bare foot struck his leg.

He stumbled sideways as I connected, his fingers loosening a little but not letting me go. “Ow.” He sounded vexed and pissed off but not hurt. “That was unwise.” The level of blackness in his tone was even darker than the night. Keeping hold of me, he bent a little and rubbed where I’d kicked him with his free hand. His backpack squeaked as it slipped on his back. “I wouldn’t do that again if I were you.”

“I’ll let go of you when I have my answers.”

“Answers you haven’t politely asked for!” I bared my teeth. “Say please, and maybe I’ll—”

He yanked me into his body, brushing our noses together as he stood to his full height. “Say please? Ha. How about you give me answers that I’m entitled to, seeing as you’re the one walking around my valley in your fucking nightgown.”

“Your valley?!” I squirmed and tried to get free. “I think he would have something to say about that.”

His eyes lit up, glowing brown and blue. “He being...”

“None of your damn business!” My self-defense training kicked in. Memories of getting free from attackers swamped my muscles, and I spun beneath his arm, forcing his wrist to twist at an unnatural angle. The evil pouring off him coated the back of my throat like tar.

My hackles warned he wasn’t a good guy.

I needed to go.

I spun the final way, ripping his fingers off me and parrying backward.

Hissing beneath his breath, he shook out his twisted wrist, his eyes narrowed and sharp. “You’ll pay for that.”

Backing faster, I grabbed a stick from the ground and brandished it at him. “I think it’s my turn to ask a question.” I swished the stick through the air. “Who the hell are you?!”

Dropping his arm, he slipped his shoulders back. Ever so slowly, he shrugged out of the backpack, not looking down as the bag dropped to the ground with a thud.

He didn’t answer me, his eyes skating all over me with fascination bordering on obsession. His stare made my skin crawl. Waving my stick, I snapped, “Eyes up here, buddy.”

A half-smirk twisted his lips. “Am I making you uncomfortable?”

I hid my shudder. “Don’t flatter yourself.” I arched my chin at the cave where he’d appeared from. “Leave before I hit you. You’re trespassing.”

His eyebrows shot up his forehead as a choked laugh rumbled in his chest. “Shit, this just keeps getting better.” He held up his hand, shaking his head. “I’m the one trespassing?”

“Yes. Leave.” I looked over my shoulder, searching the night forest, wishing that Kas was close. Where had he gone? Worry over his state of mind and what he’d intended to do as he’d run from the house trickled ice down my spine.