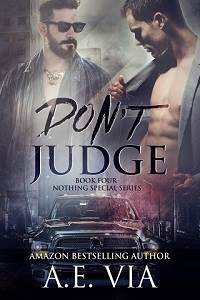 Michaels wanted to roll his eyes and sigh so badly that his temples throbbed as the sweat ran down his flushed skin. Instead of disrespecting his father, he stabbed at his eggs, shoving a fork full into his mouth.

“You listening to me son? Don’t think I don’t see you fuming over there. Did you forget I’m a detective too?”

How the hell can I forget? You remind me every chance you get.

“You ain’t been a detective but for five damn minutes, so don’t start acting like you so high and mighty just because you work for a man named God.”

Michaels sat up straighter in the plastic booth at the mention of one of his Lieutenants. No one talked bad about them to him; he wouldn’t allow it. Lieutenant Godfrey—known as God—and his partner Lieutenant Day, ran the best narcotics task force on the East Coast. Working for them had been a goal of his since he’d graduated college. Michaels came from a long line of law enforcement officials. When he didn’t join the police academy straight out of high school like most of the Michaelses, instead opting to go to college first, everyone thought he was rebelling against their tradition. His master’s in psychology helped him make detective ten years faster than either his father or grandfather had. He was only thirty-two and was a detective on the most decorated and highly regarded task force he was aware of. Although he’d gotten his Lieutenants’ attention by charging headfirst into one of their takedowns and putting his life on the line to save one of God’s men, he’d still aced his detective’s exam because of his education; and his father hated that.

“Besides. Why the hell is he hiring on so many gay detectives? Everyone’s calling them the fairy squad,” his dad scoffed.

“Oh, yeah. Who’s calling us that?” Michaels snapped, dropping his fork on his plate.

“Well tell them to say it to our faces.”

Michaels’ dad smirked at him from behind his coffee mug and he immediately felt like an ass. He’d let his father bait him again. There was no fucking way anyone was saying that about his team and meaning it. They were the ones who made the big arrests. They were the ones cleaning up the streets. They were the ones that were called when someone needed back up. They’d saved countless asses on forces all across the district. God and Day were owed so many favors that they couldn’t keep up.

“Dad, I gotta go. I have a strategy meeting at nine.”

“What are you working on?”

Michaels ran his hand through his short, dirty-blond hair. He hadn’t put any gel in it today, so it just fell where it wanted. He hated when his dad asked for details. He’d been on God and Day’s task force for three years now, and his dad still asked him questions he knew he wasn’t permitted to answer. “You know I can’t tell you that, Dad.”

His father’s face turned an unsettling shade of rose. In his position as the Major of Zone One, he was certainly not used to being told he wasn’t privy to information. Regardless, Michaels had orders. Under no circumstances was he to disclose information on their cases to anyone that wasn’t granted specific permission by his Lieutenants. Departments had leaks, informants, and undercover agents who weren’t afraid to use classified information to advance their own agenda or their own cases.

Michaels’ father’s zone had the homicide department with the highest clearance rate in the region, and God would have Michaels’ head on a stake if he found out he was sharing information with another zone. One wrong word or one slip of pertinent information could result in one of their cases going cold because word had leaked out.

“You can’t! What the hell you mean, you can’t?” His father yanked his wallet out and slammed a couple twenties on the table. “You ever heard of professional courtesy, Austin? Not to mention I’m your goddamn father. But I guess that doesn’t matter.” The young waitress quickly picked up the half-empty plates and scurried off, not making eye contact since his father’s voice had risen to an embarrassing level.

“Dad. A lot of the information regarding our cases is classified. Very few people know who we’re targeting and when we’ll strike. God and Day do that on purpose to eliminate the risk of our suspects getting tipped off.” Michaels’ voice was calm, hoping his dad would follow suit.

“Do you think I’d tip off your goddamn suspect? Austin. Jacob. Michaels. You are on thin ice, boy,” his father growled, standing to leave. His stark black uniform with gold enhancements was pressed to perfection and hung majestically on his fit frame. Michaels was built just like all the men in their family. Duty fit. Good height, just enough to tower over the average man. Broad, defined back and thick arms. Thighs that were muscular, but lean enough to chase and catch a suspect.