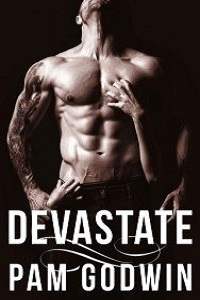 Tate Vades reclined in a shadowed booth, glaring at a high-top table of women across the grimy tavern. They’d been stealing glances at him all night, winking and licking their lips and abrading his nerves.

There had been a time when he would’ve invited them over with a crook of a finger. But his hands didn’t twitch. Neither did his cock.

He hardened for only one woman. A fierce woman with eyes of molten brown and fire in her soul.

What a cruel thing love was, silent and desolate in its torture. How ironic that loving someone was the thing that hurt the most.

He knew how to suppress the physical, psychological, and emotional repercussions of violence. How to tune out the echoes of his weakened screams. The unholy pain of his bludgeoned flesh. The sharp, bitter scent of blood.

He was a survivor of captivity and sexual torture, and despite it all, he still considered himself a proud, dominant man. But when it came to love, he was a victim, powerless and unbearably alone in its apathetic clutches.

Two years ago, Camila Dias rescued him from his ruthless captors. She’d appeared out of nowhere, stunningly beautiful with guns blazing as she murdered the man who had paid Van Quiso a million dollars for Tate’s body. A man who meant to own Tate and use him in depraved ways.

But Camila saved him from that fate. She freed him. Then she stole his heart.

“Can I get you another beer?” A server stopped at the table, his tattooed fingers deftly collecting the empty bottles in front of Tate.

“No, thanks.” He lit a cigarette but didn’t inhale.

He wasn’t a smoker. Not anymore. He just needed to keep his hands busy while he came to terms with what he planned to do.

His long-suffering patience with Camila had finally reached its end.

He’d helped her bring down Van Quiso’s sex trafficking operation in Texas. Her small vigilante group—the Freedom Fighters—was her therapy, her way of consoling the wounds she’d collected during her own captivity in Van’s shackles.

She, Tate, and five others—Ricky, Tomas, Luke, Martin, and Kate—lived together, fought together, and slowly recovered from their shared experiences as Van’s slaves-in-training. After they escaped, Tate bided his time, giving Camila space to heal, to focus on her revenge, and to open her heart.

Two years later, she still didn’t belong to him.

Of all her roommates, he was her closest friend. When they were alone, she spoke of her darkest desires and forbidden fantasies, her seductive voice leaving him endlessly hard and desperate. But he hadn’t fucked her, hadn’t so much as kissed her.

He thought he was being chivalrous, providing her a safe place to put her trust and with time, her love.

He was a fool.

She didn’t want chivalry or patience or love. At least, not with him. She was holding herself back for something. Or, if his intuition was correct, someone.

But who? Who did Camila dream about when she slept alone every night?

He snuffed out the cigarette and tossed a wad of cash on the table. He was done waiting. Done being friend-zoned. It was time to introduce her to the real Tate Vades. The man who would compel her to her knees with a look, grip her by her stubborn throat, and demand her secrets, her submission, and her love.

Rising to his feet, he turned and collided with a rock-hard body. “Excuse me—”

“Have a drink with me.” Hazel eyes and dark hair, the ridiculously attractive stranger gestured at the booth, his accent hinting at south of the border. “I insist, Mr. Vades.”

He knows my name? What the fuck?

“Who are you?” Tate held the stranger’s intense stare with one of his own.

“We’ll get to that. First…” The man waved over the server. “A glass of aguardiente. Neat. And another beer for my friend.”

Camila drank aguardiente. Always neat. She said it was the way Colombians preferred their soft vodka.

This man, with his accent, Colombian features, and choice of drink… He was connected to her somehow. Tate was certain of it.

“I’m sorry.” The server scraped a hand through his hair. “You said ah…gwar…dee…?”

“They don’t serve aguardiente here.” Tate slid back into the booth, eyes on the mysterious man. “You’re a long way from Colombia, ese.”

“It’s Matias.” He held out a large hand in greeting.

Never heard of him. Tate stared at the outstretched fingers in silent rejection.

With a sigh, Matias lowered his arm, ordered vodka, and sent the server away.

“You’ve been taking care of someone extremely important to me.” He sat across from Tate and rested a muscled, tattooed forearm on the table. “Someone who belongs to me. For that, you have my deepest gratitude.”

Camila belonged to no one. She never talked about her Colombian roots or her cartel connections, never mentioned any names from her past. Except her dead sister. She spoke of Lucia with a longing that trembled her pretty lips.