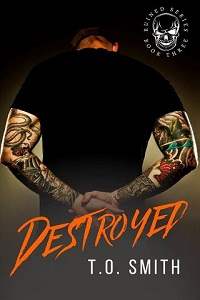 I’ve been in love with my president’s little sister for years.
She’s broken – destroyed.
But I’m determined to save her.
I’ll give her a purpose. I’ll make every demon that makes her suffer my demons as well.
I’m going to save this woman…
Or I’m going to die trying.

I clenched my jaw as I glared at Ink from across the room. We were on the outs – again. It was a common occurrence. I got lost in my head, got too buried in the depths of my darkness, and I pushed him too hard—too far—and made him walk away.

We were hot and cold—didn’t fucking mix well. But for some reason, the man never fucking gave up on me.

I didn’t even pretend to try to understand it. Fuck, I hadn’t even let him have a fucking taste of anything except my lips since we started this shit years ago.

I couldn’t let him see my body.

So, for him to always be like this, always eventually coming back to me, I didn’t fucking get it.

Gloria moved up beside me as she began mixing a drink for one of the guys. “I don’t know why you keep getting all twisted up inside about him when you keep sending that poor man through the wringer.”

I narrowed my eyes at Gloria. “Watch yourself,” I warned her.

She sighed as she slid the drink across the bar to Whiler with a smile before she turned her body to face me. “Jessie, all I’m saying is that you need to get your head together,” Gloria told me, looking at me with no judgment in her kind eyes. She understood. But she was also the kind of person to tell me when I was being a bitch, which I knew I was, but goddammit, that man pushed all my fucking buttons.

“Ink loves you with every fiber of his being, but a man can only take so much, and it’s going to kill you inside when he finally admits defeat and walks away from you.”

I didn’t even bother to respond, and I knew she didn’t expect me to. I just tossed my bar towel onto the counter and strode out from behind the bar, moving down the hall towards my room at the back of the clubhouse. I wasn’t listening to any more of what she had to say. I wasn’t interested in fucking hearing it.

The Sons of Hell—my brother’s club—was all I had known for years. And Ink, who was my brother’s VP as well as his best friend, had fought hell and high water to stay by my side despite my brother’s warnings.

Me? I was so fucked up that I just went through continuous motions of letting him in and then pushing him away.

After all of this time, I still struggled to cope with what had happened to me.

It had been so dark—so fucking dark.

I shook my head, shaking the memory away as I pushed open the door to my room, shutting it back behind me once I was safely inside of my sanctuary.

I kicked my boots off and shoved them to the side, moving towards my bathroom. I stared at my face in the mirror, staring at the scar that ran through my eyebrow and down my cheek. I hated that scar—hated it with every fiber of my being—because it was just a sore fucking reminder of the shit I had gone through.

The shit I had barely survived.

I’d been rescued from Charles, and sure I was physically alive. But inside? I was dead. Just like now. There wasn’t any saving me. I lost myself during that torturous time, and Charles took my soul with him to Hell when Tristan—the old Sons of Death’s president—put the bullet between his eyes.

Now, I was just a shell of the woman I used to be.

I used to be so full of life—always partying, dancing, having sex, just being a fun club girl. There was so much life inside of me. I gave my brother absolute hell. Adelaide, Joey’s old girlfriend, was my damn best friend during that time. We got caught in all kinds of bad shit together—shit Joey always had to save us from.

Sometimes, I felt like my brother would prefer to continue saving me from all of those bad situations than to see me like this.

Some of us—like me—never escape out of that fucking dark hole.

A tear slid down my cheek.

Shaking my head, I pulled my shirt over my head. I wouldn’t cry—fucking couldn’t. I was so tired of crying all of the time. I just wanted to feel numb. Was that too much to ask?