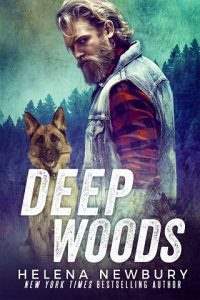 THIS IS A STORY about people.

It’s about a smoking hot guy called Cal, a guy so big and intimidating, so much part of the forest that they nicknamed him Bigfoot. A guy who turned out to be the most loving, most protective guy in the world. And it’s about me, Bethany, a very normal, pale, curvy girl who never thought she’d leave the city, or even why she’d want to.

But this is also a story about people and what happens when they’re treated like a commodity. And it’s about the huge, wild places where there are no people, where you can walk and walk and never see another living soul, where you can be totally alone with the person you love.

We need to start at the beginning, though. And before the stars and the sunrises and the rivers, before campfires crackling and a cow nuzzling my palm and being carried in Cal’s strong arms and before I was running barefoot through the forest, terrified for my life...I met Rufus.

This is a story about people, but it begins with a dog.

IF I HADN’T been moving slowly, I’d never have heard him. A shift had just ended and most people were running through the cold March rain to their cars. I was left far behind as I trudged across the parking lot, exhausted. I’d just pulled a double shift and my neck and back were in agony from hunching over my computer, my ears ringing from twenty-four hours of being yelled at. Everything seemed gray. Slate-gray sky overhead, newspaper-gray buildings all around me...even the fumes from the factory next door smelled gray: a bland chemical tang that got inside your nostrils and blocked out anything pleasant. All I wanted to do was get home and cocoon myself in bed with a movie—

I froze. What was that?

There’d been a sound. Faint, almost covered by the hissing rain. But it resonated deep in my chest, waking a chain of instincts and setting them ringing like silvery bells. My mom had had those same instincts, and her mom before her. None of us could ignore them.

It was the sound of someone in pain.

I looked around. Everyone else was getting into their cars. The next shift were already inside. I was the only one who’d heard it.

The sound again: high and ragged, a kind of wail. I moved slowly towards it. In the alley between two buildings, I could just barely make out a dark shape on the ground. A drunk, passed out? Or was it a trap, was the guy going to leap up and grab me when I got close? I looked back at the parking lot and cursed. Everyone else was driving away.

I took a tentative step into the alley. I could hear him breathing, now. Slow. Labored. And there was something off about it: each out-breath was a throaty rasp.

I took another step and the shape twisted and lunged, teeth snapping. I screamed and jumped back, going down on my ass on the soaked concrete.

I dug out my phone and switched on the flashlight. Tan fur and a shining black nose. Big brown eyes. A dog. It was stretched out on its side, but it had twisted and raised its head to snap at me. I traced the light over its tall, silky ears and the black patch that covered its back. A German Shepherd, almost as big as me.

We stared at each other. The dog gave a warning growl, a rumble that made my insides turn to water. Stay back. But as I retreated down the alley, the growl became a whimper.

I lifted my phone higher and traced it over the dog again, lighting up the rest of it. Metal strands gleamed bright, tangled around two of the dog’s legs. Barbed wire. The ugly little spikes had sunk into its flesh and the more it struggled, the more it hurt itself.

That feeling in my chest again, the one I couldn’t ignore. I needed to help it but as soon as I inched forward, it barked, loud enough to make my ears ring. I froze, my heart hammering. I’d gotten a glimpse of its teeth, this time, teeth designed to rip and tear flesh. It was only aggressive because it was scared, but it could still injure me. Maybe even kill me if it went for my throat.

I had no idea what to do. I’d never been around a dog before, at least not a big one. The only ones I saw around my apartment building were tiny little pugs. “It’s okay,” I told the dog. I crawled forward and, on instinct, I held out my hand.

The dog stared at it and then sniffed suspiciously, its nose twitching. It growled again, but less certainly.

I crawled closer, one inch at a time, hand still extended. The dog tensed, ready to attack. I could see the muscles coiling under its coat. “It’s okay,” I said in a strangled voice.