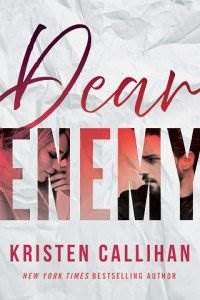 I could easily forgive his pride, if he had not mortified mine.

Question 1: If you had to do high school all over again, would you?

Delilah Baker: Is this a trick question? No.

Question 2: Who is most likely to succeed from our class?

Delilah Baker: Oh, come on. Everyone knows it will be Macon. Not that he’ll deserve it.

Macon Saint: Me. And Delilah Baker. She’s like a barnacle; she’ll cling until she gets where she wants to go.

Question 3: Who do you want with you if there’s a hostile alien invasion?

Macon Saint: Delilah Baker. She’d yap so much and so loudly the aliens would turn around and flee.

Delilah Baker: Macon Saint. I’d toss him in their path and gain valuable seconds running for my life.

Question 4: Most memorable moment in high school, and did you enjoy it?

Macon Saint was the devil. Anyone with a lick of sense knew it. Unfortunately, when it came to Macon, none of my fellow classmates at Shermont High School seemed to possess the sense that God gave them. No, they’d all fawn over him as though he were a god. I suspected that was the true mark of the devil: turning people into starry-eyed fools when they ought to know better.

Not that I could blame them. Beauty made fools of us all. Macon had the face of an angel—so beautiful you wondered if it truly had been sculpted by the hand of God, black hair so thick and glossy it might well have had a halo floating over it. Yes, he was that pretty. The only one who could rival him for sheer physical perfection was my sister, Samantha.

While the rest of us were entering adolescence with all the awkward grace of molting swans, struggling with our too-big puppy feet, crooked teeth, and certain features that grew faster than others, only Macon and Sam remained immune.

What a pair they were, pimple-free and perfectly proportioned. Luminous against the normal tarnish of puberty. It wasn’t any surprise that they became an on-again, off-again couple throughout middle school and high school. The beautiful ones.

The ones destined to make my life hell.

Cold and often silent, Macon would usually stare at me as if he couldn’t quite understand why we were sharing the same air. It was one thing we agreed on. Otherwise, we got along like snow and salt.

The first time I saw Macon, he was standing on the great expanse of lawn that stretched toward the manor house that had been in his mama’s family for generations. Clutching a baseball, he watched me as I rode my bike up and down the road. He was skinny as a rail and two inches shorter than me. I’d felt oddly protective of him, believing the look in his eyes was one of vulnerability. I found out quickly how wrong I was.

“Hey,” I said to him, after stopping in front of his house on my bike. “I moved into the house down the way. Maybe you’d like a friend?”

He turned his eyes on me then. Those dark, dark eyes, so brown they were almost black, surrounded by thick, long lashes. Eyes that girls would call pretty and sigh over throughout all our days of school. Cold and calculating eyes, if you asked me. Those eyes narrowed on my face. “You stupid or something?”

He shrugged. “Guess so.”

I didn’t understand this boy. I’d been polite, just as my mother had taught me. “Why would you call me stupid?”

“I’ve lived here my whole life. You think I wouldn’t notice if someone new moved in on my street? You think I need more friends?”

“I was just being sociable. My mistake.”

Politeness was clearly for chumps. “You’re a jerk.”

He lifted his chin then, revealing a bruising scratch along the edge of his jaw. “And you’re annoying.”

Whatever I might have said was lost to time, because Sam decided to show up then. Younger than me by a mere ten months, Sam and I were what people sometimes snidely referred to as Irish twins. That had a darker component when they were referring to us, since it was clear to anyone with eyes that I bore little resemblance to the rest of my family.

Blonde hair french braided and gleaming, she smiled. Her missing front teeth made her look like an impish pixie. “Don’t pay any mind to Delilah. Our grandma Belle calls her ornery.”

Which is why I liked Grandma Maeve better.

The nasty boy looked at me from under the inky fringe of his bangs when he answered her. “It does.”