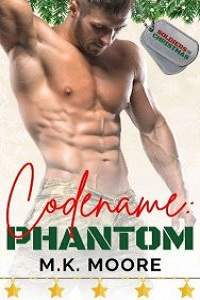 “Phantom?” My XO calls me over to him. I’ve been standing with the rest of my unit, waiting to go home. Finally.

“You’ve got your orders?” he asks.

“Yes, sir,” I say, nodding, patting the papers in my pocket.

“Sargent Timmons is a good man, and he’ll help you out. Congrats on your promotion. You’ve earned it.

This is about as emotional as either one of us will allow. He shakes my hand as I board the transport plane. He’s getting married at the end of the month, and the whole unit is invited, but I doubt we’ll have a chance to speak there. He’ll be busy. Coming home after being deployed for twelve months feels good. It’s the second time I’ve been deployed in three years and the first time I’ve gotten off for Christmas since I enlisted five years ago. I have been promoted to a specialist, but that doesn’t start until after the new year. I will be stationed at Fort Drum until they decide where I go next. The plane ride from Afghanistan was uneventful to me, but when we land and are dismissed, I thank God that the next two weeks are mine to do whatever I want. The first order of business is the girl that got away. Desiree Austen. Growing up in Yonkers, she was my neighbor and best friend’s little sister. The night before I shipped out all those months ago, we finally ended up in bed together, but since then, she’s ignored every letter, email, and text I’ve sent her.

I would have claimed her a long time ago, but she was three years younger than me. The minute she turned eighteen, she was mine, or so I thought. She’s my one and only. The only woman I’ve ever loved. The only woman I’ve ever been inside of. It’s supposed to be us until death parts us. I promised her I’d be back for her, and here I am making due. My car has been parked at the vehicle storage lot at Fort Drum. I made sure it was clean and sealed up tight before I left. I walk from the plane after dismissal to the lot. I dig my keys out of my bag and unlock the car. I dump my duffel on the backseat before popping the hood; I reconnect the battery and unseal the tailpipe. I pray to God as I start the car. It starts right up. Everything looks great as I pull out of the lot. As I begin the five-hour drive home to claim my woman, I think about our last night together.

Everything about her delights me. She’s kind, she’s outgoing, she’s gorgeous, and she’s funny. Her sense of humor has always made me laugh. We met when I was ten, and she was seven. Her brother, Steve, became my best friend the day they moved in next door. We did everything together. He’s in his first year of med school now. I’m not too sure what he’s got going on in the love department, but I had to wait for the love of my life to grow up. She’s grown now. It’s late at night, so the drive home is a breeze. It’s three in the morning by the time I get there, and a more polite guy would wait until morning to knock on her door, but that’s not me.

I knock, waiting for someone to answer.

“Dude, it’s three in the morning,” Steve says as he opens their front door. He’s wearing a full set of pajamas, slippers, and a robe. Who the hell is this guy? More on that later, though, I have more pressing issues.

“What are you doing here?”

“In bed, like literally everyone else in this time zone.”

“Go ahead,” he says, stepping aside to let me in. “But, be prepared. She’s changed a lot since you’ve been gone.”

“Thanks, man,” I say, wondering what the hell he means by that. I follow the path down the hallway I know as well as my own next door. I didn’t even go home before coming here. I had to see her. Her bedroom door is open, so I go on in. She’s sound asleep. I stare at her like a fucking creep for a while. I pull my boots off as well as my jacket and shirt, tossing them on the chair at the foot of her bed. I hear a low gurgling noise coming from the other side of her bed. Walking around the bed, I see a bassinet, and inside of it is the cutest damn baby I’ve ever seen. He’s wearing a camo sleeper, and his full head of hair is messy. He’s fussing, so automatically, I pick him up, cradling him to my bare chest. My mind races with thoughts of who’s baby this could possibly be. I stare down at the baby who has snuggled into my chest. He sighs dramatically and falls asleep again. I don’t know how long I stand there, staring at him and breathing him in. Eventually, I turn back to face her bed when I hear her stir in her bed.