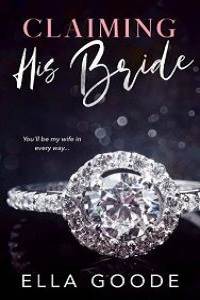 My eyes flick toward the door. Run! My mind screams. I don’t even know what lies on the other side of that door, but the red exit sign lets me know it at least goes to the outside. But then what?

I’m in a city that is completely new to me. I don’t know my way around or have anyone to help me. Not that it really matters much. I didn’t really know anyone from the city I grew up in either. The people I did know would be quick to hand me back over to my stepmother, Mara, who would then hand me over to the man who paid a small fortune to have me.

For a fraction of a second, I thought maybe I could do this. Arranged marriages aren’t so far-fetched. I think lots of cultures still believe in them. Though I’m not sure if this could be considered the same thing since Edward Blackwood actually bought me. It wasn’t as though our parents thought we’d be a good match or something. I mean, the man is at least twice my age. Hell, he’s almost three times my age.

I met my soon-to-be husband at an event over a year ago. When he approached me that night, Mara cut in and told him I was too young for him, to my surprise. Half the reason she forced me, along with my stepsister Isa, who was actually willing to go to these events, was for marriage prospects. Edward screams of money. Mara had drilled into my head for years how to spot if someone was wealthy or rich. Yes, there is a big difference to her, and Edward is wealthy. And that’s the only thing that matters to my stepmother.

After that night, things got a bit quiet at home. I should have suspected something when she stopped dragging me to events. I’d chalked up her not taking me anymore to her being embarrassed of me. She’s always poking at something when it comes to me. From my hair to my weight or whatever I’m wearing, saying outright that I was embarrassing. I should have never let my guard down.

Two weeks before my eighteenth birthday, I was informed that I was not only moving but I’d also be marrying Edward Blackstone. When Edward’s name came out of her mouth, my heart sank. I remembered him immediately. There had been something in his eyes that put me on edge. Even if I’d only met him once over a year ago.

When I had a small meltdown, Mara told me there was no choice. He’d paid his down payment for me and would be collecting. She’d already spent the money. That had been another shock to me. How could she be broke? My dad was a very wealthy man. When he passed, it was my understanding that he’d left her everything. It’s been five years since I lost him. I still can’t comprehend how the heck she could have spent every penny of my dad’s fortune.

I tense when I hear something, thinking it’s Edward coming back to collect me. But after a moment when he doesn’t enter the back room where he left me, I relax to a degree. His driver, who he’d told to watch me, stands off to the side, playing on his phone.