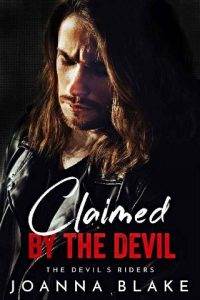 The wind cut through my leather jacket like a knife. It was an unusually cold California night. Too cold for this time of year. It made riding long distances a bitch. But I had shit to do and places to be.

A life depended on it.

The guys were at the clubhouse having a meeting. They knew I'd be late but I still hated it. I owed them a debt. I’d come from nothing and had nothing before I joined the club. They were my brothers and I would die for them. But Hendrix was different. He wasn’t just family. He was the only part of my old life that was still with me. Hendrix needed me. He'd picked up a stone last week and it had gotten infected. He was in pain.

My horse was my best friend. He was family. He was also my responsibility. I was his fucking dad, for lack of a better word.

We’d been through hell and back together. There were times I had struggled to find food for myself. But I always found a way to feed him. I loved him more than anyone living. Hell, I loved him even more than my ride, the steel and chrome that was pretty much an extension of my body. But I could replace metal and gears. I couldn’t replace him. I wouldn’t even try.

Tonight, I was meeting the vet at the stables to make sure he was going to be okay. I knew there was a chance I might get the very worst kind of news. A horse couldn’t live without four viable legs. But I couldn’t think like that. I couldn’t even imagine life without him.

Back in the day, Hendrix had been the one who helped me get from job to job in the farming community where I grew up. It was before I was old enough to drive. Although, to be fair, I had started driving way before it was legal.

Fuck, I’d barely been eight years old when I started driving the tractor around the farm.

Hendrix had been a little jealous when I got my first motorcycle. It was a piece of junk that needed to be rebuilt from the bottom up, but I didn’t care. I think even my horse knew it was love at first throttle. But I'd never stopped riding him. The truth was, I’d spent more time chilling with my horse than hanging with friends or getting girls.

That hadn’t changed in all the years we’d had together.

But he was getting old now. Hell, he’d been old for a while. But I'd taken really good care of him. He was well loved and he knew it. He was the last thing I had from home, and I prayed fervently that this wasn't the end for him. It would be like saying goodbye to my mother and the farm all over again.

The wolves had been at the door quite literally, but Hendrix and I had held down the fort. Even now, with the old farm standing empty and finally almost fully back in the family name, I always pictured us back there together.

I always knew I would go back someday. Make it a home again. I just hoped he would be with me.

I pulled into the parking lot faster than I should have, sending gravel flying. I was off my ride and inside the stable in two seconds flat. I saw that the vet was already there as I rounded the corner. She was an older lady, smart as a whip . She didn’t pull punches. She told it like it was. But she was always so kind to Hendrix. She liked animals better than people, which was something I could relate to. I really respected Dr. Garcia. I counted myself lucky that she worked with the family that ran the stables so there was always someone on call.

Meg and Joe’s little girl was hanging with Hendrix as usual, perched across from Hendrix’s stall on a bale of hay. I think she loved the horse as much as I did. He did have that effect on the ladies, the handsome devil.

“Hey, kid,” I said, thinking idly that she was going to grow up to be gorgeous one day.

“Hey, Nick,” she chirped, but her eyes were troubled. She loved animals and was already a crack rider. But she especially loved Hendrix. I knew he got plenty of apples when I wasn't around, thanks to her.

I ruffled her baby soft hair, earning me a dirty look.

“Thanks for keeping an eye on him, spark plug.”

The vet finished examining Hendrix and gave me a reassuring smile.

“The infection is already clearing up.”

The breath left my body in a whoosh. I’d been scared out of my mind. But I was realistic. I knew he wasn’t going to live forever.

“He’s got some good years in him yet. But he needs special food and a little more TLC. A heated blanket would go a long way to keep his joints from stiffening up.”