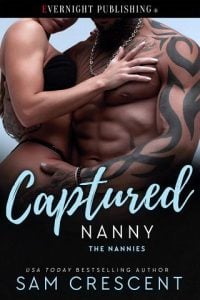 “Give me back my fucking daughter!”

The chair hit the glass for what had to be the hundredth time, and like all the other times before, it dropped to the floor without success. The woman on the other side didn’t give up.

Wolf Jackson wasn’t impressed. The woman screaming for her kid wasn’t the problem. No, the issue he had was with the men who’d accidentally captured this woman and her five-year-old child.

Never in all his years had he known of such a fuckup.

“She won’t stop,” Mitchell said. “She has punched and bitten anyone who has gotten near her. Ralf had to go to the doctor.”

“And you don’t understand why?” Wolf growled as he spun toward the man who’d been his right hand for the past five years. “That right there is a mother. Look at the way she is dressed. She is not some fucking bitch off the street with no life and no one looking for her. This is a woman with an identity, with a life.” He shook his head and glanced back at the mirror. She couldn’t see two men watching her, but he could see her, and what a woman he was looking at.

He’d been around desperation for so long, he had forgotten what a woman with everything to lose could fight for.

The women who were normally purchased and sold were addicts. Women who came from the streets offering their bodies for payment for their next hit. They were never missed. Often, their loss was seen as a blessing because the cops wouldn’t see them on the streets, shot up with whatever shit they were craving.

Running a hand across his face, he left the room and walked several feet to his office where the little girl sat on the floor. She was on her knees, her coat still wrapped around her, tights covering her small legs. This child wasn’t homeless or uncared for. She was loved, taken care of, and pampered. Even her hair was pulled back into one of those French plaits he had no idea how they were done.

The girl looked up. “Where’s my mommy?”

“She’s doing fine. Just a few more questions to deal with,” he said, approaching the table and crouching down.

He wasn’t a good man. Most saw him as a monster, evil. He’d killed men and women with his bare hands without batting an eye. Death didn’t bother him. He’d driven through the city streets plenty of times with blood coating his clothing and hands, and he didn’t care one bit.

What many didn’t know was he had rules. The people he killed were not good. They were evil, and so there was no reason to feel guilt.

He’d never killed an innocent or a child.

That woman back in the room was innocent. This child, she didn’t deserve death.

“I’m not allowed to talk to strangers.”

“Wolf Jackson,” he said, holding out his hand. “Now I’m not a stranger.”

The girl frowned at his hand and put the crayon she’d been using down. “But … those men. I watched them hit girls, they were bad men.”

He ground his teeth together. This girl had already seen too much, and so had her mother.

“That’s why I had to rescue you. Nothing will ever happen to your mother or you. You’re safe.”

The girl tilted her head to the side and then held up her little finger. “Do you pinky swear?” she asked.

He chuckled. “Of course.” He put his pinky to hers, and the little girl smiled.

“If you pinky swear, it means you have to keep your promise.” She nodded. “Mommy always said a pinky swear was sacred. No one could break them, and you could trust in a pinky. I’m Evelyn.”

“Evelyn, nice name. What about your mommy?”

“Thomas.” Evelyn picked up her pencil and started to color again. “Rain and Evelyn Thomas, two strong women about to make a life for themselves. It is what Daddy would have wanted.”

He frowned but figured Rain had said it enough times for Evelyn to copy it.

“You carry on coloring, and I’ll be back in a little while.” He left his office, flicking the catch on the lock. “I want every single little detail on a Rain Thomas right now,” he said to Mitchell.

The man ran off, looking like death was chasing at his heels, which it would be if Wolf wasn’t satisfied.

Having to handle this fuckup was an embarrassment. He walked back toward the room and saw Rain hadn’t given up. This time, she was kicking at the door. Her face was red, and perspiration dotted her brow. The only reason he’d caught sight of her was all the fuss she’d been making.