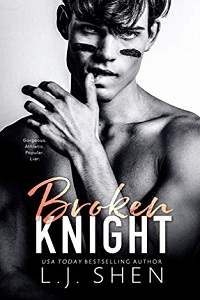 “Someone I loved once gave me a box full of darkness. It took me years to understand that this, too, was a gift.”

“Who Do You Love?”—The Chainsmokers feat. Five Seconds of Summer

“I Wanna Be Adored”—The Stone Roses

“I Will Follow You into the Dark”—Death Cab for Cutie

“I Predict a Riot”—Kaiser Chiefs

I drove a fist into the oak tree, feeling the familiar sting of a fresh wound as my knuckles split open.

Bleeding helped me breathe better. I didn’t know what it meant, but it made Mom cry in her bathroom when she thought no one could hear. Whenever she glanced at my permanently busted knuckles, the waterworks started. It had also earned me a trip to talk to this guy in a suit every week, who asked about my feelings.

My earbuds blocked out the sounds of birds, crickets, and crispy leaves under my feet. The world sucked. I was done listening to it. “Break Stuff” by Limp Bizkit was my designated ruin-shit anthem. Fred Durst might look like a ballsack in a cap, but he had a point.

Most kids liked fighting each other. Not me. I only wanted to hurt myself. When my body ached, my heart didn’t. Simple math, and a pretty good deal.

A pinecone dropped on my head. I squinted up. My stupid neighbor, Luna, sat perched outside our treehouse, bouncing another pinecone in her hand and dangling her toothpick legs from a thick branch.

“What was that for?” I tore the earbuds from my ears.

She motioned to me with her head to climb up. I made no move. She waved me up.

She arched an eyebrow, her way of asking what my problem was. Luna was nosy, but just with me. It sucked.

“Vaughn stole my bike,” I announced.

I’d have beaten the crap out of my so-called best friend, Vaughn, if I wasn’t so sure I’d kill him by accident. He’d said he wanted me to lose my shit. “Get it out of your system.” Whatever that meant. What’s a system? What did he know about mine? About anger? His life was perfect. His parents were healthy. He didn’t even have an annoying baby brother, like Lev.

Luna threw the second pinecone. This time I caught it, swung my arm like a baseball player, and threw it back at her, missing on purpose.

She produced a third pinecone (She kept a stash in the treehouse in case intruders came upon us, which was honestly never.) and made a show of throwing it at me.

I finally snapped. “You’re so dumb!”

She blinked at me.

“Stop looking at me that way!”

I didn’t care what Vaughn said. I was never going to want to kiss this girl. God help me if she ever asked me to.

I climbed on the tire swing and up to our tiny treehouse. Vaughn thought he was too cool for treehouses. Good. It was one more thing that was Luna’s and mine that he wasn’t a part of.

Luna jumped from the branch. She rolled on the ground, straightening up like a ninja and patting herself clean with a satisfied smile. Then she started running toward our neighborhood. Fast.

“Where are you going?” I yelled as if she was going to answer.

I watched her back disappear into a dot. I was always sad to see her go.

This was all so stupid, anyway. I didn’t know anyone who could talk Vaughn into doing anything. Luna couldn’t even talk, period. Plus, I didn’t need her help. I’d walked away from him because if not, I knew he’d get what he wanted from me—a dirty fight. I wasn’t like him. Pissing off my parents wasn’t a lifetime goal.

Sometime later, Luna came back riding my bike. I stood up, shielding my eyes from the sinking sun. It always burned brighter when the ocean was about to swallow it.

She waved at me to come down.

I threw a pinecone at her shoulder in response. “Rexroth.”

What? her quirked eyebrow said. She could tell me a thousand things with her eyebrows alone, this girl. Sometimes I wanted to shave them off just to spite her.

“I always get even. Remember that, cool?”

She motioned toward my bike, stomping her foot.

We huddled inside the treehouse. Instead of thanking her, which I knew I should, I pulled out the pages I had printed earlier and arranged them on the wooden floor between us. Our foreheads stuck together with warm sweat as we both looked down. I was teaching her profanity in sign language—the stuff her father and therapist never would.

“Says here dick is a ‘d’ handshape tapping the nose,” I mimicked the picture on one of the pages, then flipped it on its back. “Oh, look. If you want to say fuck you, you can just give the person your middle finger and pout. Convenient.”