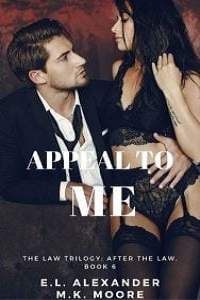 Having a former president for a father wasn’t easy. I was in the spotlight for twelve years, and I knew I didn’t want that life. Even after we left the White House, it didn’t end. My parents ate that shit up, but I never did. Parties, library dedications, being on the news because I bought a particular pair of sneakers, it all grated on my nerves. So I played the perfect first kid until I couldn’t anymore.

As soon as I was able, I was out the door. I chose a life of crime when others wouldn’t have, but I wouldn’t change a thing. I've taken specific jobs to garner attention, and my life of petty bullshit crimes paid off. I ended up in New York of all places with the Vitali crime family of all people. Growing up in both DC and Silver Falls prepared me for this. You wouldn’t think a family like this would value each other, but they do. I’ve been here exactly one hour, and I can already tell. I came here for a New Years’ Eve party, which is well underway. I wasn't exactly invited, but they didn't turn me away.

I stand at one of the four bars that were placed in the corners of the room, waiting for the bartender to make my drink—scotch on the rocks. I look up when I hear the sound of lilting laughter. Then I see her. The source of the laughter. She’s dancing with her back to me, I can’t see her face yet, but it doesn’t matter. My body yeans for her all the same. I can’t explain it. Her short black dress leaves nothing to the imagination, and I don’t like knowing that every man in the room is thinking the same thing I am. Her big hair is dark and curly, and I wouldn’t be surprised if an entire can of hairspray is holding it up like that. The man she’s dancing with is about to be a dead man. He’s whispering something in her ear. She's not laughing anymore. Her shoulders tense up. My fists clench at my side involuntarily. I don’t like what I see, but she must not like what she hears either because she hauls off and punches him in the face. From my place a hundred feet away, I can tell she broke his nose. My suspicions are confirmed when blood pours out of his nose and onto his pristine white dress shirt. It serves you right, asshole. I smirk, knowing that’s got to hurt like a bitch, having been on the receiving end of a broken nose a dozen times or so, but never at the hands of a woman. Despite my penchant for illegal activities, I steered clear of women. I didn’t have time to be trapped by the wrong one. It was easier to jack off until I found the right woman—the only woman for me. Honestly, I was so busy doing the shit most men, even criminals, don’t want to do that I didn’t notice. That is until I saw her.

“Fuck you, Matteo,” she screams, and the music cuts out with a screeching sound. Men from all over the room move toward her in a protective stance, as do I. I don’t even know what she looks like except that she has an ass like you wouldn't believe, but I know that I’ll kill for her. Kill the bastard who dared to piss her the fuck off.

“What’s going on over here?” Fabrizio Vitali shouts as he pushes through the crowd. I met him as I came in. He’s a no-nonsense kind of guy, and I respect that.

“Nothing, Nonno. Matteo was getting fresh with me, but I handled it.” Nonno. Grandfather. The girl is a granddaughter of Fabrizio Vitali. He runs New York with his brother, Alberto.

“I didn’t do anything to lead him on, honest,” she says, her breath hitching as if she’s about to cry. I don’t like that one fucking bit. The asshole on the floor doesn’t deserve her tears. “He asked me to dance, and I said yes. I was just being nice. That wasn’t an invitation to proposition me.” She kicks Matteo in the shin. I can’t help laughing out loud when the rest of the room is silent. She slowly turns her head in my direction, and I am dumbstruck. Her beauty is beyond anything I’ve ever seen, but it’s her eyes that have me hooked. They widen when they land me. She’s got the devil in them, and I want to bring it out more. She looks right at me when she says, “I’m a good Catholic girl, I swear, Nonno.” She turns back to her grandfather, and I suck in a deep breath. Fuck. If that’s not the hottest thing I’ve ever heard, and it was directed right at me.