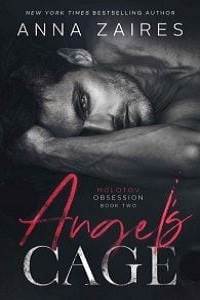 I’m back. Back in the devil’s lair.

The thought loops through my pain-dazed mind as the car rolls to a stop in front of Nikolai’s ultra-modern mountain mansion. A man and two women in hospital scrubs—presumably the medical team Nikolai mentioned—are waiting for us on the driveway with a gurney. Behind them is Alina, Nikolai’s sister, her beautiful face pale and worried.

I register all this only in passing. All my senses are consumed by the man holding me possessively on his lap.

His powerful arms are wrapped around me, securing me against his large body, and even though I’ve just seen him kill two men, I can’t help but derive comfort from his touch, his warmth, his familiar cedar-and-bergamot scent. His taste lingers on my tongue, my lips throbbing from his kiss, and as much as I want to deny it, dread isn’t the only emotion filling the pit of my stomach at the thought of him keeping me here against my will.

“Just a few seconds longer, zaychik,” he murmurs, smoothing back my hair, and a shudder ripples through me as my eyes meet his tiger-bright gaze.

I can see the monster underneath his beautiful façade. It’s now clear as day.

Pavel jumps out of the car first, opening the door for us, and a wave of dizziness crashes into me as Nikolai climbs out, holding me clasped against his chest. Though he’s careful, the movement sends a stab of nauseating pain through my arm, and the distant mountain peaks spin in a sickening circle in my vision as he gently places me on the gurney.

Squeezing my eyes shut, I focus on breathing and not passing out as I’m wheeled inside the house, with Nikolai barking orders to the medical team in between speaking Russian to Alina and Lyudmila. I presume he’s explaining what happened, but I’m in too much pain to care either way.

I’ve never been shot before, and it’s not fun.

When I open my eyes next, I’m in my bedroom, with the doctor and his team bustling around my gurney. Within seconds, an IV is taped to my left arm, and I’m hooked up to several monitors. I have no idea where all this medical equipment came from, but my bedroom appears to have been transformed into a hospital room.

The doctor, already in scrubs and a surgical mask, asks if I’m allergic to latex or any medication as he pulls on a pair of gloves.

“No,” I croak out, and one of the nurses attaches a bag of liquid to the top of the IV stand. Immediately, a pleasant lassitude spreads through me, making my lids heavy.

The last thing I see before the world fades away is Nikolai standing in the corner of the room, his golden eyes trained on me with fierce intensity. There’s still a dark smear on his cheekbone—blood from the man he tortured to get answers—but with the sweet relief of anesthesia spreading through my veins, I can’t help the loopy smile that curves my lips.

I’ll keep you safe, he said, and as the darkness claims me, I believe him.

He’ll keep me safe from everyone except himself.

My sister intercepts me as soon as I step out of Chloe’s room. She must’ve been standing in the hallway the entire time.

It’s Alina’s fault we’re in this mess. She told Chloe I killed our father. She gave her the car keys, enabling her to flee.

At my words, Alina flinches but stands her ground. Her face is still pale and puffy, but her green eyes are clear and she no longer smells like a drug cocktail. “I mean, what’s her condition? What did the doctor say?”

I sigh, raking a hand through my hair. “She got lucky. The bullet went straight through her arm, just barely grazing the bone. She’s lost a good amount of blood, but not enough to require a transfusion. She also has a sprained ankle. Other than that, she’s just bruised and scraped all over.”

“Kolya…” My sister looks as miserable as I’ve ever seen her. “I’m really sorry. I didn’t know about the—”

“Stop.” I’m not in the mood to listen to her apologies and justifications. She might not have known about the killers hunting Chloe, but that doesn’t excuse what she did. Nor does the fact that she was high on her meds. Before I say something I’ll regret, I ask, “Where’s Slava?”

“Lyudmila took him to visit the guards. I asked her to keep him out of the way for now, given… you know.” She waves toward Chloe’s door.

“Good thinking.” I know I shouldn’t mollycoddle my son, but I’m oddly reluctant to expose him to the brutal realities of our life, the way our father did with me. Hunting and fishing is one thing—I’m happy to have Pavel teach Slava that, along with other key life skills—but I’d rather not have him see his tutor covered in blood.