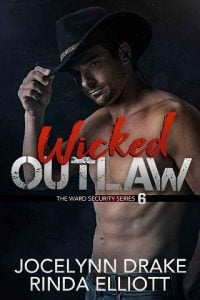 Cole tried to smile at the woman sitting opposite him, tried to follow what she was saying about her daughter. She’d already shown him some pictures of the eight-year-old. The tiny blonde nymph was adorable, but he couldn’t focus on what the woman was saying. He was too aware of the people crowding the restaurant, making any quick exit a difficult thing.

He should never have agreed to this.

Or maybe he should have had Rowe pick a different location. The last thing he wanted to do was cause trouble in Rialto. The restaurant hummed with customers, and the tables were closer together than he liked. The dim lighting and flickering candles created a romantic atmosphere he just wasn’t feeling.

“You haven’t done this in a while, have you?” Monique murmured.

Cole’s gaze snapped up to her face. “Excuse me?” He reached for his glass of water. It was on the tip of his tongue to tell her that he never did this, that he was an IT specialist and this was completely out of his comfort zone, but she continued before he could speak.

“Oh.” Cole blinked at her and nervously touched his tie as if to straighten it but stopped himself at the last second. “No. I don’t go out much. I tend to work a lot of hours.”

Monique’s smile grew a little wider, a little sweeter. Her blue eyes watched him with an amused warmth. “I get it. With everything going on, I’m not up for dating yet. I’d much rather spend my time with my daughter than going out.” She bit her bottom lip for a second and continued. “However, if you’re ever in the mood to get out there again, I do have a girlfriend who would be fantastic for you. She’s a lot of fun and very sweet.”

“Well, this has got to be a first.” Rowe’s low chuckle came through loud and clear in the earwig Cole was wearing. “Cole’s date is trying to fix him up with some other chick. Man, this is striking out on a whole new level.”

Cole barely resisted the urge to roll his eyes. He didn’t want Monique asking why he’d made such an expression. She couldn’t hear Rowe since they’d not bothered to set her up with an earwig.

This wasn’t a date.

While Monique was beautiful in one of those rich, flawless ways with her waterfall of smooth blonde hair, delicate features, and expensive clothes, she was not his type.

Not that he thought he had a particular type. He liked women who were…well, women who didn’t mind that he was quiet and reserved. Who didn’t expect him to fill silences with lots of useless chatter. He liked independent women who felt real.

Monique was definitely real. She looked too perfect, too flawless to actually to be the kind of real that would be interested in him.

Of course, none of this mattered. This wasn’t a date. It was a sting operation, and Cole was the bait.

How he’d let Rowe talk him into this nonsense was beyond him.

No, that wasn’t true at all.

Rowe had taken one look at him and explained that Monique was newly divorced from a rich and powerful man who liked to abuse her. Now the man was trying to take away custody of her daughter. The bastard had been trying to scare Monique into giving up custody by threatening her life.

Cole had been only too happy to offer his help to trap the asshole.

He just hadn’t realized that helping meant posing as the woman’s new boyfriend.

Normally, one of the Ward Security bodyguards would have stepped into the role, but most of the guys were already on assignments, and the ones who were available were needed to serve as backup in case the whole operation went south.

This was supposed to be simple: Go to dinner with Monique in a very public place. Be sweet and attentive. And leave it to the spies the bastard had following Monique to report that his ex-wife was on a date.

He should be grateful Monique was a nice person. She seemed sweet and kind. Definitely not someone who deserved to deal with this kind of shit.

“Thank you,” Cole murmured. He was inwardly happy when the server returned to take away their plates. Neither one of them had eaten much. Nerves twisted up his stomach, and Monique couldn’t be in much better shape.

“Would either of you care for dessert?” the server inquired.

They looked at each other, neither seeming particularly excited about extending things a second longer. Cole opened his mouth to turn it down, which was a real shame. He loved dessert. Well, he loved anything that was served at Rialto. Owner and head chef Ian Banner had acquired the best cooks and pastry chefs in the entire city.