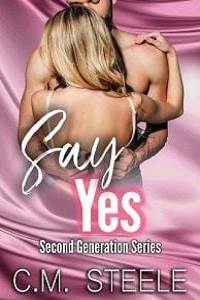 I’ve just entered home from a long day on patrol of the south side. Shit’s getting hairy, and I nearly had a shootout with a drugged-out wife beater. When we finally had him in custody, I breathed a sigh of relief. Being a cop isn’t for the faint-hearted, but I love it, and I want to be just like my father. He’d retired early as a detective because his family had old money; he served the city of Boston well during his time. Now it’s my turn to show what I’m made of, even though I’ll get my trust fund of ten million dollars next year.

I tug on my police vest as I get out of my Tahoe. Since I have an early start tomorrow, I need to get into the shower and a bite to eat before I pass out. My condo is close to my station, which turned out to be one hell of a benefit.

I’ve just undressed and hit the shower when my phone rings. I climb out, wrapping a towel around my waist before grabbing my cell in case it’s work. Nearly stumbling into my bedroom, I see it’s my sister, Emily. “What’s up?” My voice is panicked because it’s well past midnight. She should be in bed. It’s the last week of Junior year, and she should be asleep, not calling me.

“My friend needs someone to pick her up. She’s stranded at the mall with no ride home, and all buses stopped running.”

Immediately I’m pissed off. I’ve never met this girl, but she’s a teen out this late with predators everywhere. “Where the fuck are her parents?” Our parents have always been super protective of us, so it’s ingrained in me to be the same way.

“Out of town. Greta’s ride for work left without her, and she’s scared. Mom and Dad are busy, and you’re much closer to the mall than James or Benji.” That’s the code word for my parents fucking. They’re like rabbits. It’s crazy, but I love that they’re so damn happy together.

“Okay. I’ll be there in five minutes.” I hurriedly get dressed and dash down to my SUV. The sky opens up in a torrential downpour as I pull out of the parking garage, adding insult to injury to this poor girl. I make it to the mall in record time. Searching through the pouring rain, I see her standing outside the Target where she works, attempting to stay under the eave, but it does no good. I pull up and roll down my window.

“Are you Greta?” I don’t get a great look at her at first because she has her head down, avoiding the frigid rain.

“Yesss,” she says, teeth chattering as she stands on the curb and a stiff wind breezes between us. It’s the end of May, but we’ve had a cold spell.

“I’m Emily’s brother, Dean. She asked me to give you a ride home. Climb on in.” She moves closer, reaching for the handle, and I’m struck. This soaking wet little thing is beautiful. Long blonde hair, darkened slightly by the rain. Her bright blue eyes are captivating. Suddenly she freezes. Those eyes appear confused. God, I need to get a hold of myself.

“What’s wrong?” I call out, leaning on the center console, stealing a better look at the little thing.

She bites her bottom lip and shrugs. “You know the whole stranger danger thing?” She has a valid point.

I nod and put up my hand. “I’m a Boston cop, but I don’t blame ya for not hopping in. Here hold on a sec.” I pull out my phone and dial Emily. “Hey, Em, tell your friend you sent me.” I hand her my phone after putting it on speaker.

“Hey chick, get in the damn truck. My brother isn’t going to bite. I promise,” she huffs out. I can picture her rolling her eyes as she says it.

“See.” I wave my hand to tell her to come in. Then, silently, she slides in and hands me the phone, keeping her head down, slips on her seatbelt. “Em, I’ll see you Sunday, okay?”

“Sure thing. Thanks again, big bro.”

“So your address, Greta?” She reads off her address, and I fucking blanch. It’s the same block where the situation went down today. She can’t fucking go back there alone.

“Greta, I’ve got a spare bedroom. You can stay at my house tonight. It’s late and your parents aren’t home. It’s not safe, especially after what went down just two hours ago.”

“Mr. Evans.” Goodness, she makes me sound old. Am I that much older than her? She’s got to be seventeen or close to eighteen. Shit. I’m twenty-four. Too old for her for at least another year.

“Dean, I don’t think that’s a good idea.” Neither do I, especially the way she says my name, but I can’t help myself. A rush of protectiveness washed over me the second she lifted her gaze to mine. She’s probably only seventeen and still in fucking high school, so I use that to fight the growing need in my pants.