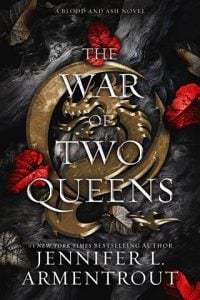 The click and drag of claws drew closer as the weak flame above the lone candle sputtered and then went out, pitching the cell into darkness.

A thicker mass of shadows appeared in the open archway—a misshapen form on its hands and knees. It halted, sniffing as loudly as a godsdamn barrat, scenting blood.

The smooth bands of shadowstone tightened around my throat and ankles as I shifted, bracing myself. The damn stone was unbreakable, but it did come in handy.

A low-pitched wail came from the creature.

“Mother—” The thing exploded out of the archway, scurrying forward, its keening moan becoming an ear-piercing screech. “—fucker.”

I waited until its stench of decay reached me and then pressed my back against the wall, lifting my legs. The length of the chain between my ankles was only about half a foot, and the shackles wouldn’t give an inch, but it was enough. Planting my bare feet into the creature’s shoulders, I got a good, most unfortunate look at the thing as its foul breath blasted me in the face.

Man, the Craven was not a fresh one.

Patches of gray flesh clung to its hairless skull, and half of its nose was gone. One entire cheekbone was exposed, eyes burning like hot coals. Lips torn and mangled—

The Craven twisted its head down, sinking its fangs into my calf. Its teeth tore through the breeches and into flesh and muscle. Air hissed between my gritted teeth as fiery pain burned its way up my leg.

The pain was more than worth it.

I would spend an eternity taking these bites if that meant she was safe. That it wasn’t her in this cell. That she wasn’t the one in pain.

Shaking the Craven free, I dragged the short chain over the thing’s neck as I crossed my feet. I twisted at the waist, pulling the dull bone chain tight across its throat, ending the Craven’s screams. The shackle clamped down on my throat as I kept turning, cutting off my air as the chain dug into the Craven’s neck. Its arms flailed on the floor as I jerked my legs in the opposite direction, snapping the creature’s spine. The spasming became more of a twitching as I hauled it within reach of my bound hands. The chain between my wrists, connected to the shackle at my throat, was much shorter—but long enough.

I grasped the Craven’s cold, clammy jowls and brought its head down hard, slamming it against the stone floor by my knees. Flesh gave way, spraying rotting blood over my stomach and chest. Bone split open with a wet-sounding crack. The Craven went limp. I knew it wouldn’t stay down, but it bought me some time.

Lungs burning, I unwound the chain and kicked the creature away from me. It landed by the archway in a tangled mess of limbs as I relaxed my muscles. The band around my neck was slow to loosen, eventually allowing air into my burning lungs.

I stared at the Craven’s body. At any other time, I would’ve kicked the bastard into the hall like usual, but I was weakening.

I was losing too much blood.

Breathing heavily, I looked down. Just below the shadowstone bands, shallow slices ran up the insides of my arms, past both elbows and over the veins. I counted them. Again. Just to be sure.

Thirteen days had passed since the first time the Handmaidens swarmed this cell, dressed in black and as quiet as a tomb. They came once a day to cut into my flesh, siphoning my blood as if I were a damn barrel of fine wine.

A tight, savage smile twisted my mouth. I’d managed to take out three of them in the beginning. Ripped their throats out when they got too close, which was why they’d shortened the chain between my wrists. Only one of them actually stayed dead, though. The damn throats of the other two had stitched themselves closed within minutes—impressive and also infuriating to witness.

Learned something valuable, though.

Not all of the Blood Queen’s Handmaidens were Revenants.

I wasn’t sure how I could use that information yet, but I guessed they were using my blood to make brand-spanking-new Revs. Or using it as a dessert for the lucky.