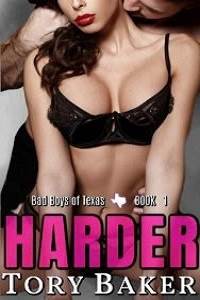 I’ve known the McCray boys—well, men, really—for what seems like ever now. Sure, we live on neighboring farms; that still doesn’t mean we don’t know one another. Knox, though, he’s been the star of my fantasies for more years than I can count. Too bad he doesn’t know I exist. It could be because I’m younger than him, or it could be because he’s already forged his path in the local rodeo circuit when he’s not working on the farm. I’m not sure what it is, all I know is, I’m going to do my best to finally capture his attention.

His dark chocolate-brown hair with shots of blond running through it from the sun lazily hangs in front of his face when he’s not wearing his cowboy hat. His green eyes with specks of yellow in them remind me of the hay fields when they’re tall and ready to be cut. Then there’s the scruff of his day’s old stubble. Add the way Knox looks in a white T-shirt, showcasing his muscular chest and arms, the molded-to-his-ass and legs brown tag Wrangler jeans. And, Jesus, what he does to me… Not to mention when he’s lifting a bale of hay or on those rare occurrences we’re both at the same rodeo and I get to watch him ride a bull for those long eight seconds. It’s also why I’m lying in bed, my nightgown hiked up to my stomach, one hand on my breast, tweaking my nipple the way I’d imagine Knox would do, and my other hand is inside my panties. The slick folds of my center giving way to my greedy fingers, playing out how he would take me, his body on top of mine, or maybe he’d let me ride him. The way I’m aching right now, it won’t take me long to get off. I’m careful not to use my fingers too deeply, saving that precious gift of mine for Knox and only Knox.

“Knox,” I moan, trying to hold it in even though I’m on the other side of the house. Living at home at the age of eighteen—technically, almost nineteen—well, it’s definitely a downfall. I throw the pillow over my head, using one finger to slide inside me, the palm of my hand grinding down on my clit, wishing my fingers were Knox’s or his length. I ride out my orgasm, my body shaking, breathing heavily, yet it doesn’t do anything to stop the soul-aching need to be with him.

Tomorrow’s a new day, and I think I have just the right idea to finally get Knox to notice me.

“God damn it, Trace. I told you enough is enough.” I’m attempting to fix the fence at the north pasture where our dumbass bull decided to trample through to the next ranch over. There are four corners on our ranch. To the right is where Trace is talking about right now. The fucker is consistently trying to goad me into something, but I’m far too old to even think about Blakely that way.

“I’m just saying you keep screwing around, that girl will be swooped up, and you’ll be the miserable old fart people talk about. I mean damn, man, did you see her a few weeks ago? That woman can fill out a pair of jeans, not to mention her in a dress.” The cutters slide out of my hand from working on the barbed wire fence, nearly slicing through my gloves.

“Are you done yet?” My brother isn’t looking at me, and he damn sure isn’t helping me. Nope, he’s too busy looking at her.

“Fucking told you, numb nuts.” He pats my shoulder and takes the cutters from my hand, leaving me with my dick in the wind. That’s because the woman he was talking about is in the pasture walking in the wildflowers with her dark chestnut hair hanging down her back, eyes that I know are as blue as the bonnets that grow in our home state of Texas, deep cherry-red lips, a dimple that appears when she smiles, and a body that I have no fucking right to be staring at.

“Trace!” I call out once I hear the motor start up on the side-by-side we use to haul equipment around in, but the damn fool takes off, leaving me with nothing but the tools and the woman who has me gripping my cock more often than not.

I hear him laughing even though he’s just about out of sight. This is who my brother is, the youngest of us McCray boys. I’m the oldest coming in at thirty- three, and Trace is twenty-seven. Mom and Dad had a hard time getting pregnant with both of us, the reasoning for the age gap between us. Which is why I should be locked up in a jail cell for looking at Blakely. She’s eight-fucking-teen, barely legal, but damn, she definitely doesn’t look it, especially right now. Hair flowing in the wind, a dress that’s molded to her body, white in color with small flowers. It’s the way her breasts shake as she walks, the subtle glimpse of thigh with every swoosh of that damn flimsy fabric Blakely calls clothes. I shake my head, needing to return to the fencing before this bull goes over and impregnates their cows like he tried with the Boyd’s.