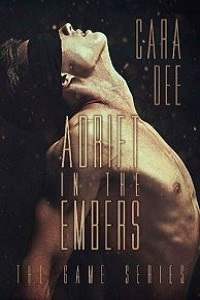 “What’re you going to do first thing on Monday?”

I scratched my ear and felt my nose twitch. There was something about the smell in Denver.

“Probably go to the bathroom,” I answered frankly. We drove past big factories and plants; maybe they were responsible for the poop smell. “I can’t have breakfast before I’ve peed.”

Daddy sighed and switched lanes. We were almost at the airport. “You’re going to call a real estate agent,” he reminded me.

Oh, right. Yeah. To get my place on the market.

Funny how I’d never really liked my little condo, but now when I was evidently moving to Denver, I wanted to cling to it.

I looked down at my headphones resting in my lap and rubbed my forehead. “I have a headache again, Daddy.”

“You can buy painkillers at the airport.”

That was true, but it wouldn’t treat the core issue, just the symptom. I should not have spent the past two weeks in and out of regression as heavily as I had. Daddy knew I couldn’t resist that mental space, even when it hurt me.

He used to claim that big-boy decisions shouldn’t be made in my Little space, and it’d been a semi-vacation full of decisions. Days of being little, evenings of being Daddy’s partner in a suit, nights of being little again. Bleck.

I’d been happy for my Daddy when he told me he’d gotten his dream job here. I just hadn’t realized everything would change so quickly and mostly without my input.

“Are you going to Mclean tomorrow?” he asked.

“You’ll make new ones out here.”

That part hurt the most. We were involved in the best kink community in the whole wide world right outside DC. Like, we had our own kink mansion! A huge, three-story Victorian house painted black—because Sadists thought that color would make it look more like a haunted mansion, which, in turn, would scare us. They were funny sometimes.

We had everything there. Playrooms, guest rooms, barbecue area, pool, hot tubs, our own nightclub… Seclusion. The mansion was surrounded by a little forest and then nothing but fields.

I released a breath and peered out the window, and I scratched off some smudge from the glass with my finger.

How could I say goodbye to all my friends?

I had a week to figure it out. One week, and then Daddy would come back to get started on the move. He had work stuff and meetings to attend to now while I went home. He would probably buy a house too. He’d taken me to some showings this week once it was settled and he knew the job was his.

I wasn’t impressed or interested, but I had to be a good boy for Daddy. What kind of submissive was I if I didn’t want to please him?

Closing my eyes for a beat, I tried to breathe calmly through the throbbing of the headache. It felt like the pain wanted to pulse its way out of my skull.

The thing I didn’t understand either was that I didn’t normally suffer from this big of a disconnect. My regression usually didn’t run deep, nor did I regress into a version of myself I couldn’t relate to—usually, usually, usually. Because I didn’t like it. But now I was basically sharing my body with another person. Crazy. It had to be unhealthy. No balance, no structure, no sense of home.

This hadn’t started in Denver, though, if I was honest with myself. It’d started this spring, before I left Daddy for my annual travels to visit family.

I should call Mom once I got through security.

When I opened my eyes again, I could see the airport.

Or tentport, as I’d called it when we’d landed here two weeks ago. What city built an airport out of big tents? Denver, that’s what.

Talk about smoking too much weed if that was their most brilliant idea.

Lane would love it here. He smoked weed sometimes.

“Lane will probably like visiting us.” Maybe if I tried to see the good things about this move, I’d hate it less.

“I’m sure he will,” Daddy chuckled. “If he finds his way to his gate.”

My cousin was not a fan of Dulles. These days, if he couldn’t fly out of National, he didn’t fly at all. Just a few months ago, when Mom and I had flown to Copenhagen straight from Dulles, Lane had opted to depart from National, land in New York, and then fly to Copenhagen.