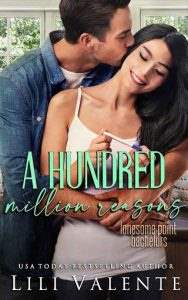 If Yasmin North knows one thing for sure, it’s that love sucks. That’s why she’s moving forward with her happily-ever-after solo plan, with the help of a sperm sample from a six-foot-two donor who apparently holds a doctorate in both computer science and social work. Meaning he’s brilliant and kind—talk about superior baby-making DNA.
But when the sperm bank informs her the sperm she has her heart set on was mistakenly sold to her from the storage-only database, Yasmin declines the refund and sparks up a please-let-me-have-your-baby-batter email negotiation with the unnamed donor instead (albeit, not very successfully). Add in her mother’s prize-winning rooster terrorizing her around her parents’ farm and so far, Yasmin’s move back to Lonesome Point is proving less than ideal…
The first time Noah O’Sullivan visited his cousin in Lonesome Point, Texas, he fell hard for the fun, quirky little town. So he’s not really surprised to find himself falling hard for a fun, quirky Lonesome Point girl. The moment Yasmin races past him, chased by a giant demon rooster, his gut utters two words—yes and mine.
It’s clear he and Yasmin have an instant connection, but convincing the wounded woman to let him be her knight in faded blue jeans is proving harder than he expects. Especially when he discovers she’s the woman who was accidentally given his sperm sample…

Yasmin North, only child, miracle child, late in life blessing to Li-Mei Wang and her husband Peter North, was born under a lucky sign.

Her mother, an expert at interpreting the Chinese lunar calendar, had no doubt that this was true. Brought into the world on the fourth calendar day in the year of the rat, Yasmin would be intelligent and fond of study, marry a loving husband, and thrive into a happy, healthy old age. And since Li-Mei had pushed with extra intensity to make certain her daughter was born on this fortuitous day, she took both pride in and credit for setting her offspring up to succeed from the moment of her first breath.

Li-Mei was so convinced that Yasmin had been born lucky that for thirty-four years she had stubbornly ignored all the signs to the contrary.

As Yasmin streaked across the Lonesome Point town square, running for her life, chased by a vicious rooster named Sampson the Third—son of Sampson the Second, grandson of Sampson the First, and the latest in a long line of prize-winning roosters born to collect blue ribbons at the state fair and hate Yasmin with the passion of a thousand white-hot suns—she wondered if this would be the day her mother finally admitted that, somewhere along the line, Yasmin’s lucky star had gotten crossed.

She wasn’t blessed. She was cursed.

Cursed with the worst luck on the planet and a healthy dose of poor judgment to boot.

She should never have told her mother that she would handle unloading the animals at the petting zoo.

Her mother’s roosters had always hated her. Always. It was as if they could sense that Yasmin was the only thing in the world that Li-Mei loved more than her feathered babies. Even Yasmin’s father, a kind-hearted farmer whose skin had weathered to the same shade as the light brown clay soil he worked, came second to Li-Mei’s magnificently bred roosters.

Magnificent bastards, Yasmin thought, crying out in pain as Sampson the Third got close enough to peck the back of her bare calf.

She poured on a burst of speed, arms churning at her sides as she dashed past the gazebo in the middle of the town square, where craft and food booths were already set up for the town’s annual festival. People who had known her as a child and borne witness to similar bouts of rooster rage, shot her pitying looks, and Mrs. Monroe called out that she would text Yasmin’s mom and let her know she needed help, but everyone was either too busy, or too concerned with the fate of their own unprotected calves, to intervene.

As she shot past Jaycee’s popcorn hut, Yasmin dared to hope that Sampson might be distracted by a cluster of little kids dropping kernels onto the ground, but of course he wasn’t.

Sampson had tasted Yasmin blood and was now infected with the same unholy hunger as his forebearers. From now until the day of his death, this rooster would hunt her with the single-minded intensity of a deranged serial killer.

The thought wrenched a hysterical sob from Yasmin’s chest.

Thoughts like that just weren’t funny anymore. Not when she’d spent several months last year dating a man who had later been unmasked as the Texas Terror, a serial killer responsible for taking the lives of dozens of women, including Yasmin’s best friend’s sister-in-law.

It was the straw that had broken the camel’s back.

Cheaters, losers, bums, and liars were one thing—and Yasmin had certainly dated her fair share of those—but knowing she’d gone to bed with a murderer and had no flipping idea that the hands that touched her with such tenderness had committed acts of unspeakable brutality had sealed the deal.

From now on, she was a solo agent. Clearly her judgment couldn’t be trusted, which meant no more dating, no more men, no more rolling the dice and hoping the next man to take her out for coffee would turn out to be the Prince Charming her mother always assured her was waiting around the corner. With luck like Yasmin’s, she just couldn’t take the risk.

Learning the truth about her ex had been the wake-up call she needed to realize that her happily ever after was never coming, at least not riding on a white horse. Her thirty-fifth birthday was closing in fast. If her dreams of children and a big, happy family were ever going to come true, she was going to have to manifest them on her own.

That’s why she’d moved home to the old farmhouse on her parent’s property, the little one where she’d grown up before her mom and dad had built their dream house down by the stream where Pop loved to fish. Her parents would let her live there for free, and she’d found work as a virtual assistant to several independent musicians who needed someone perky and personable to manage their social media pages. She could live modestly, but happily, on her income and when the baby was born, she would be all set up to work from home.