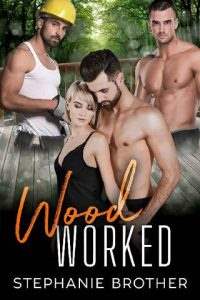 “All right, that’s all I’ve got. I’d say that’s enough for your first day, right?”

My new boss looked over the five of us. In some ways, it was nice starting my first job out of college with other newbies. On the other hand, it was starting to feel a bit like we were a pledge class. “Any questions?”

Zeke looked over at me. He was the owner and founder of Zee Tech Industries. He’d instructed us to refer to both the company and himself as Zee. Yeah, that wasn’t confusing at all. “What’s on your mind, Alicia?”

“Alyssa,” I corrected, not for the first time. “When will we find out what division we’ll be working with?” Though we’d been joined at the hip today as we took the tour, filled out HR paperwork, and listened to Zeke’s many welcome spiels, we were each supposed to be placed with a different team.

Zeke raised an eyebrow and gave us a crooked smile. “Come back tomorrow and find out.” He clapped his hands like an over-enthusiastic camp counselor. “Now go home and live your lives. We’re all about work-life balance here at Zee Tech.”

He actually made shooing motions as we gathered up our things. I walked out of the huge open workspace next to McKenna, the only other woman in our little group. “Ready to go live your life?” I asked her.

She grinned. “If unpacking a million boxes counts as living.”

“At least you’ve been here since Thursday. I’ve only had one night in my apartment. I couldn’t even find a blanket last night, so I had to use my winter coat.”

McKenna laughed as we stepped out into the parking lot. “Not much need for that here.”

That was true. Though it wasn’t exactly warm, it also wasn’t cold in my new town of Lake Boise, Louisiana. It was nothing like the January weather back home in Colorado.

“Wait up.” Dan, another new recruit, caught up to us. He had sandy blond hair and a stern expression that masked his quirky sense of humor. “Are you two doing anything tonight?”

“Unpacking,” we said at the same time.

“I did that a long time ago,” Dan responded with a grin. He’d gotten his degree at the university here in town, the only one of us who hadn’t moved from somewhere else. “A couple of us are going to a bar down on Main Street. Cheap beer, reasonably good food. You’ll love it.”

“Is it full of college kids?” McKenna asked doubtfully.

That made me chuckle. “Until December, we were college kids.”

“Yeah, but that doesn’t mean I want to hang out with them,” she said. “Can I let you know later, Dan?” We’d all exchanged numbers at lunch.

“Call me D,” he said, with a pretty good impression of Zeke’s over-friendly manner. “But sure. Just text if you want to come and I’ll send you directions.”

We parted ways and I thought about his offer as I climbed into my car. Lake Boise wasn’t that big, but so far, the only parts I knew were my apartment, my new workplace, and the convenience store I’d stopped at this morning when I couldn’t find my deodorant.

So far, however, it seemed like a nice town. I’d done my research before accepting the job and moving down here, but it was different actually being here and seeing the place for myself. It looked vastly different than Colorado. No mountains in the distance, for one thing. The houses in the neighborhood I was driving through didn’t look like the ones in Denver. They were older, and the trees that lined the streets towered above me.

My phone rang, and I broke into a grin as I saw my friend Kylie’s name pop up. She was probably calling to see how my first day had gone, and I was eager to share everything with her. I pulled over across from a small park and rolled down my windows. The fresh air smelled good, though there was a slight chill that suggested the night would be much cooler.

“Tell me everything,” Kylie said before I could even say hello.

“It’s amazing,” I said, trying not to gush. “You should see the products they’re working on. I want one of everything for my home. But oops, I’m not supposed to talk about that.”

“I’m getting my MBA,” Kylie said, amusement in her voice. “I’m not going to steal their idea for the latest gadget or whoozie-whatsit.”

I giggled. “What was that last thing?”

“Beats me, you’ll be the one designing it. But tell me more. What’s your boss like?”

“Charismatic,” I said, after a short struggle to find the correct word. “He’s got all these ideas and endless energy and enthusiasm. I think I can learn a lot from him.”

“I’m putting you on speakerphone,” Kylie said, and a moment later, I heard a man clear his throat. I was pretty sure my brother was joining the conversation.