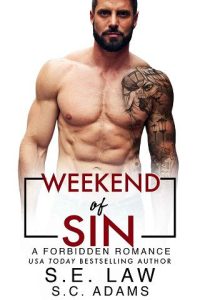 I sigh as I readjust myself in my seat, pulling my skirt down self-consciously as it rides up my thighs. I smooth out the pretty, pastel blue sweater that I’ve decided to wear for my date tonight and hope my boyfriend appreciates the way it clings to my curves, even if it’s a little itchy.

After all, Vinnie and I agreed to meet up here at our usual restaurant, The Peach Tree, for a nice dinner. It’s not my favorite place, but it’s okay. It’s better than some of the other restaurants in Millbrook at least, with cloths on the table and actual silverware instead of plastic utensils. The food is decent and the restaurant itself is nice with music piped in from hidden speakers and ambient lighting. It’s nothing too fancy, don’t get me wrong, but it’s nothing too shabby either. Plus, we come here a lot because of the prices. My boyfriend makes good money as an optometrist, but as he always says, how can you say no to bottomless salad and unlimited breadsticks? I just wish Vinnie wouldn’t ask me to steal the breadsticks by putting them in my purse. That always makes me feel so self-conscious, and I don’t want to get caught by the waitstaff.

Speaking of which, where is my afore-mentioned boyfriend at the moment? My fingers are practically itching to text him as I glance down at my phone. We were supposed to meet here at seven o’clock and now it’s seven-thirty. Yet he’s nowhere to be found. I know I shouldn’t be surprised because he’s always late, and I let out an exasperated sigh. Then again, I reprimand myself, Vinnie is busy at work, after all. He’s a licensed optometrist, and without him, a lot of people in our town wouldn’t be able to see.

Still, I really want to ask where he is, and my fingers itch. But I control myself because I know better than to ask. Last time he was running late, I sent him a few text messages just to keep in touch, but he told me not to blow up his phone like that because it “only slowed him down more.” Plus, when he finally arrived at the restaurant, he had an annoyed expression and said that “I wouldn’t understand” and “that as a doctor, he’s got pressing responsibilities.”

After that, I learned to keep my mouth shut. Although let’s be honest, I know there are no emergencies because Vinnie and I work at the same place. Maybe I just work retail at Four Eyes, but still, I know what the customer flow is like. Sure, things get a little off-schedule on occasion, but this isn’t exactly a high-stress job. So Vinnie’s “pressing responsibilities” are a little exaggerated.

But now, it’s been thirty minutes and it’s seriously getting ridiculous. I huff, annoyed. I always show up on time and yet Vinnie can’t return the favor. Instead, he always keeps me waiting and then shows up whenever he feels like it. How can our relationship be so lopsided?

I pick up my phone and start typing out a text message, but just before I can hit send, I suddenly hear his voice over the quiet murmuring of the other guests. When I look up, I see my boyfriend standing beside the giggling hostess, laughing with his head thrown back. What he could have possibly said that was so hilarious? I watch with narrowed eyes and pursed lips as he winks at her, and damn, he resembles a low-level henchman from a mafia film.

“I’m sorry sir.” I can see the hostess’s cheeks turning pinker and pinker by the second. “I didn’t mean to say that out loud, I just—well, you must be very busy as a doctor!”

“It’s no problem, hon.” Then, Vinnie grins. “And please, call me Dr. Tucci. Speaking of which, I guess I forgot to take this off,” he says, shrugging out of his white lab coat. “You know, work was just so busy today and I sometimes forget to change.” He feigns embarrassment as he slowly takes off the long white coat in almost cinematic slow-mo, and I roll my eyes as the hostess practically squeals.

“Wow, you must be such an important doctor! Thank you for your service, Dr. Tucci.”

I want to jump up and scream, “No, he’s an optometrist, not a medical doctor. Not the kind of doctor who’s been on-call 24/7 due to the pandemic. There’s a difference!” But of course, Vinnie doesn’t say anything and lets her continue to fawn.

“No problem, honey. I don’t mind making the sacrifice for my country, and really, the people of the world.”

“Oh my!” the hostess sighs, practically melting by now. “I mean, I’ve always had so much respect for doctors. You guys save so many lives every single day. Again, thank you Dr. Tucci,” she gushes.