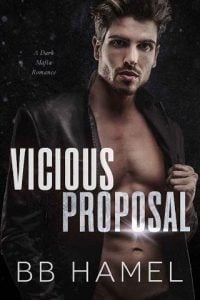 I looked at the house looming in front of me like an axe in the mist and wanted to turn back, but my brother would kill me if I skipped this meeting. I looked down at the paper in my hand, at the address and the time and the name, written in a neat script: Nervosa.

A chill ran down my spine.

“We can turn back, you know.” Palmira leaned against the porch railing and looked at her nails. She was tall, wiry, pretty, with dirty blonde hair and a perpetual smirk. She wore jeans and a casual button-down with a gun tucked into a holster at her hip. She didn’t bother trying to hide it. She’d grown up with my brother and they were best friends, and now she was my bodyguard.

Really, more like babysitter. Except instead of being certified in CPR, she could kill a man fifty different ways.

“You know I can’t.” I squared my shoulders and stepped forward. “He’ll only see it as weakness.”

Palmira sighed. “You Oligarchs and your games.”

“I’m not playing anything. All I want is to be left alone.”

I bristled at that. “Redmond approved it.”

“Redmond’s the head of the family. He’s got more to worry about than just your safety. That’s my job, unfortunately.”

“He wouldn’t let me come if it was dangerous.”

She snorted. “You really think so?”

I chose not to answer. Redmond was the only person in my life that had ever given a damn. My father was a bastard and my mother was a selfish drunk, which meant I spent a lot of time with my older brother. It wasn’t easy living in a compound in the middle of nowhere with nobody my own age, and Redmond had helped make growing up bearable. I wouldn’t let Palmira ruin that.

I knocked on the door, heart beating fast. Even if I was safe, Palmira was right to be worried. Nervosa had a reputation, and I was walking right into his lair, like a fly buzzing around a spider’s web. I should’ve taken the out Palmira offered, but I was too stubborn, and besides, my only interaction with Nervosa hadn’t been so bad.

He answered the door wearing a sleek black suit and a smile plastered on his pretty lips.

He was tall and broad with a wiry chest and muscular arms. Hints of his colorful tattoos pressed out from the edges of his sleeves and his collar. His hair was brushed back casually and yet looked somehow perfect, and he resembled an investment banker with an ink obsession—except for his eyes.

Those eyes betrayed what he really was.

He stared at me like he wanted to take my measure. He weighed me, judged me, and found me lacking in some imprecise way. His gaze was the glare of a predator, one used to living in a jungle filled with other killers. He seemed cold and dispassionate, so at contrast with his attractive image.

“I didn’t want to miss the party.”

His lips quirked. It wasn’t quite a smile. “You brought your nanny.”

Nervosa held up a hand, but didn’t glance in Palmira’s direction. I raised my eyebrows. I’d never met someone able to ignore her like that.

“I’m not alone in here,” Nervosa said. “The others won’t be happy if you bring muscle. Even if your muscle is—” He hesitated and grunted. “Attractive.”

I felt myself flush. I couldn’t decide if it was jealousy or anger or a combination of both.

“Palmira’s my bodyguard. I don’t come in without her.”

“Suit yourself.” He turned and began to shut the door in my face.

“Wait.” I shoved my palm forward and held it open. “She stays on the porch.”

I ignored her and stared Nervosa down.

He shrugged. “She can wait where she likes.” He stepped back and I followed him inside.

Palmira glared at me, but didn’t move to argue.

The door closed and I was alone with Nervosa in a large entryway with a lovely chandelier and emerald green marble floors. The walls were covered in gilding and wood panels, and paintings and statues littered the space. I’d been in rooms like this before, in the homes of rich people looking to impress and cow their guests with the majesty of their collections, and it was all easy to ignore.

“Come,” Nervosa said, and set off down a side hall.

I hurried to keep up. “What am I doing here?” I asked softly.

His invitation had been a surprise. I was starting school at Stanford next week, and I’d been on campus getting used to the area when I ran into him. He’d slipped a piece of paper into my hand with only the date, the time, an address, and four words: Come Find Me. Nervosa.