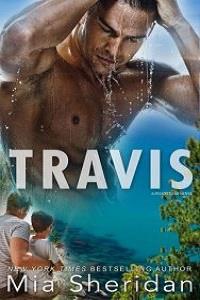 “Mommy? What’s wrong?” I approached slowly, my heart drumming as I watched my mommy’s back shake. Her head was in her arms on the kitchen table in front of her, her soft sobs muffled.

But at the sound of my voice, she sat up. Her cheeks were wet with tears, her mouth twisted in what looked more like anger than sadness. My mommy’s face did that a lot. Her eyes said one thing, but the rest of her expression, and even her words, said another. Sometimes my mommy confused me. I didn’t know if I should try to help, or run away from her.

My daddy didn’t confuse me like that. My daddy smiled with his whole face, and when he was sad, I could tell that too.

My daddy seemed sad a lot. But he loved me and I loved him. He was my hero and someday I was going to be a policeman just like him. Then he wouldn’t be sad anymore, because I would make him proud and happy.

My mommy’s shoulders rose and fell as she took a big breath. “Your daddy’s left us,” she said.

I blinked at her, my heart giving one strong knock in my chest. “Left where?” I whispered. On a trip? To the town on the other side of the lake to do policeman business?

“Who knows where!” she said loudly, suddenly, her eyes sparking with the same anger on her mouth. “He’s snuck off like a thief with your aunt Alyssa and cousin Archer. He wants them to be his family now. He doesn’t want us anymore.”

I stepped back. Away from my mommy and the words she was telling me. “No,” I whispered. “My daddy wouldn’t leave me behind.” With you. He loves me. “He wouldn’t.”

“Oh, he would and he did,” she said, her tears stopping as she tapped her fingers on the table, her long fingernails making sharp clicking sounds. Tap, tap, tap. I wanted to clap my hands over my ears and make that sound stop. I wanted Mommy to stop. The crying. The yelling. The tapping. It felt like someone was pressing on my chest.

I felt scared and sad.

He wouldn’t leave me.

But I didn’t cry. I was tough, like my daddy, and I wouldn’t cry.

My mommy glanced at her phone on the table next to her, her fingers tap, tap, tapping, harder and faster. “But maybe there’s something I can do,” she murmured, her lips tipping upward but her eyes still narrowed.

She grabbed the phone and began pressing the buttons, calling someone.

“Why, Mommy?” I whispered, my voice breaking, begging for a different answer than the one she’d given. Desperately needing something that made sense. “Why did he leave?”

My mommy stopped dialing, raising her head to stare at me. She watched me for several moments before saying, “Because I’m second best, Travis. We both are. We always have been.”

It felt like something withered and fell inside me, like the shriveled apples that dropped to the ground in our backyard. Thud. They were the ones nobody wanted.

And second best didn’t even deserve a goodbye.

The lake sparkled beyond the trees as I pushed open my brother’s gate, the squeak from the rusty hinges breaking the silence of the still summer evening. Noise that was quickly and boisterously joined by the front door banging open and my nephews—and several mongrels—rushing from inside, racing up the sloping yard to greet me.

“Uncle Travis! Uncle Travis!” the boys yelled in unison, their short legs carrying them swiftly uphill, the dogs barking and dancing around, tails wagging in a way that would have let any knife-wielding burglar or serial killer entering the property know they were more than welcome to join the family.

I laughed as Connor and Charlie reached me, bending, and scooping them up, one in each arm. “I have two stomachs!” Connor declared. “My daddy says.”

“I prolly have three stomachs!” Charlie stated, not to be outdone by his twin.

I peered down curiously at his stomach, using my fingers to tickle his side. Charlie shrieked with laughter. The dogs wove in and out of my legs and I sidestepped the brown one who seemed to always be grinning. I didn’t trust it. Anything that grinned that constantly was obviously insane.

“Did you ever see an elephant, Uncle Trav?” Charlie asked.

“What about a bear?” Connor inquired.

“Hide your nation? What’s a nation?” I asked.

Connor leaned in, cupping his hand over his mouth as he “whispered” loudly, “It’s prolly his hairy butt!”

Then both boys howled with laughter, their little bodies shaking with hilarity. I laughed too, because if you were a guy, the phrase hairy butt was funny, whether you were five or over thirty. Or a hundred fifty, I was going to assume.