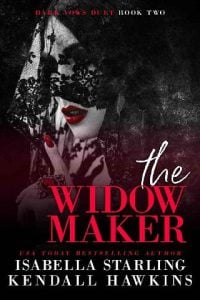 In every fairytale, there’s a moment of despair right before the resolution.

As I’m pulled away screaming for Heath, I know this is mine.

But I don’t know if my story comes with a happy ending.

My body is slammed into the boat and the man who looks exactly like my husband sneers in my face, saying, “What a pleasant surprise.”

My heart beats faster than ever and I stare up into his dark eyes that look just like Xavier’s. But he isn’t my husband. He can’t be. If this were Xavier, he’d already be choking the life out of me. The same trace of darkness is there, though. Heath, Xavier and this man… they all have the same gaze, darkened by twisted thoughts.

“When we ransacked the home of the Serpent cartel’s leader, we certainly didn’t expect to find a prisoner like you. Did you know there’s not a person out there who knew you existed? Heath never told a soul about you.”

“Ah,” he smiles, as if something’s just been cleared up for him. “So you are his little captive, then, just like I thought. This will be fun.”

My eyes narrow at him and I spit out, “I’ll make sure it’s not fun at all for you. You shot Heath, you fucking bastard.”

“What the fuck do you want?”

“Well, first, I want to know your name.”

My mind races. I still haven’t gotten over the likeness between this man and my husband. And yet he doesn’t seem to know who I am. As far as he’s concerned, I’m Heath’s secret lover. This gives me a chance, and I accept it with open arms.

“Adelina,” I mutter, using the name of my maid at Xavier’s Casa. “My name is Adelina.”

“Adelina,” he repeats, letting the name roll off his tongue. “Good, Adelina. I’ll be taking care of you until further notice.”

The boat speeds up, sending me to double over the edge and puke into the open sea. The two other men on the boat with us recoil at the sight, but the man who kidnapped me merely laughs.

I collapse on the bench in the boat and snarl, “Who the fuck are you?”

Even his name is like Xavier’s. It can’t be a coincidence. They could be twins.

I don’t get to think about my kidnapper’s identity more. The boat is speeding so fast I’m dizzy, and my nausea knocks me back, making me groan as I try to survive the journey to wherever the fuck we’re going.

The image of Heath being shot is stuck in my head, replaying on a loop. I bite my lips nervously, knowing he’s been hurt because of me.

“Can you slow down this fucking boat?” I scream at Xander over the roar of the engine. “I’m going to be sick again!”

One guard slams his fist into my cheek, rendering me unconscious in a split second. The darkness swallows me whole.

My eyes open slowly. The first thing I notice is the intense pain on my face. I groan, touching my palm to my burning cheek. I remember how I passed out. A bruise must be forming already where the guard hit me.

Slowly, I take in my surroundings. I’m in a spacious room with bars on the windows. Once again, I am a prisoner.

I’m lying on a plush white bed, and next to me, the man who kidnapped me is smirking at me.

“Finally,” he says with gusto. “You’re awake. I’ve been waiting for you to open those pretty eyes.”

I recoil when he reaches out for me, making me laugh.

He clips a handcuff on my wrist and attaches the other one to the metal railing of the bed. I struggle uselessly against it, giving up soon after. There’s no use—I’m trapped, at least for now.

“Don’t want you running off. Need to keep you alive for your darling lover,” he winks at me.

There’s something about Xander that is really unnerving. Perhaps it’s the cruel look in his eyes coupled with his easy-going, comical nature. They don’t go together, and they make me feel terrified.

“Why are you attacking Heath?” I demand. “Why did you bring me here? I want answers, now.”

“And you’ll get them,” he nods with a jovial smile while my gaze roves over him. “Let’s start with Heath. I’m sure you know Heath Gunn runs the Serpent cartel. It was news to me, however, that he was the leader. I’d heard of a certain Liberato, but nothing about his silent partner in the cartel. Imagine my surprise when I realized who it was.”