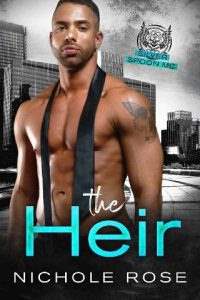 Can a billionaire biker and his rival’s curvy little sister find forever together…or is blood really thicker than water?

Andreas Romano:
Thanks to my father’s shady business practices, my life has devolved into putting out one fire after another.
The latest? Dealing with the rival MC he hired to strong-arm federal regulators into looking the other way.
The Hell’s Vipers have been nothing but trouble.
Until I stumble across Catriona Grady, their VPs curvy little sister.
Her bright eyes and sweet smile are pure sunshine.
But falling for her promises nothing but trouble for me and my MC.
I guess it’s a good thing I’ve never been one to run from a fight.
Because this little light is mine.

Catriona Grady:
People always say blood is thicker than water, but they forget the rest of that saying.
My older brother may have raised me, but he’s been nothing but trouble.
He treats me like property, and I’m not interested in being owned.
Until I run into his enemy, Andreas Romano.
When Andreas touches me, I come undone.
I’m falling hard for the gorgeous billionaire.
But there’s no way my brother will let him have me without a fight.
It’s time to choose my side.
Family…or forever?

"I don't want to move back to Silver Spoon Falls," Autumn complains, throwing her hands up in the air and scowling at me. With her dark hair up in a bun and stilettos on, she looks ready for war as she paces across my expansive office. "Good grief, Andreas. What do you not get about that?"

"It's one year, baby sister," I say, trying not to push too hard. That never works with Autumn. She's as stubborn as she is skittish. As soon as she feels cornered, she bolts. Like so much else, I blame our father for that. Vincent Romano had a vision for her life and didn't much care whether hers matched or not.

She ran as soon as she turned eighteen and hasn't set foot in Silver Spoon Falls since. I barely got her back for the old bastard's funeral last year. Trying to convince her to move back has been an exercise in futility. But I miss the hell out of her. And I want her where I can keep an eye on her.

My sister is complicated. She has a heart bigger than this state, a mouth that never stops, and a penchant for thinking she can singlehandedly save the world. More often than not, she makes waves that land her in hot water.

Her latest issue is proof of that. She and our father's former business partner, Jimmy Gatlin, got into a heated argument at the airport the day she flew in. Ordinarily, that wouldn't have been a big deal, but Autumn doesn't mince words, and someone caught the whole thing on camera. Now, the entirety of the internet is calling him Short Dick Man.

They're crucifying him, and he's out for blood.

Jimmy's a crooked motherfucker who should have been in prison a long time ago. The best thing my father ever did was cut ties with him the day he sent Autumn a picture of his cock when she was sixteen. But he's threatening to sue her for defamation and slander. And I don't have time to juggle one more thing right now.

I'm already up to my eyes in problems. My father was not a good man. He was an even worse businessman. He nearly ran our shipping company, Romano International, into the ground by making shitty business decisions and backdoor deals. The illegal dumping was the worst. God only knows how many gallons of hazardous chemicals he pumped into the oceans.

Before his untimely demise, he hid his crimes by hiring a shady lawyer. Said lawyer's solution to dealing with federal regulators was hiring the Hell's Vipers, an outlaw MC, to strong-arm them into looking the other way. They did a lot of other dirty shit for my father too.

By the time all was said and done, Montoya Investments, Jason "Cash" Montoya's grandfather's company was embroiled in the mess, nearly destroying both companies. Cash, the President of our MC, and I have been picking up the pieces ever since. Romano International and Montoya Investments are slowly recovering under our leadership. But it's been a goddamn nightmare for both of us.

Case in point: the Hell's Vipers. One of the first things we did when we found out about my father's arrangement with them was to end it. No more shady deals, no more dirty deeds…no more money changing hands. They're pissed about it.

A couple months ago, they came after Cash's wife, Hadley. Except they're fucking morons. Hadley has a twin sister. I'm guessing whoever the Vipers sent didn't know that though. They picked the wrong twin, thinking they got Cash's wife. Kyra ended up with some bumps and bruises, but was otherwise okay, thank God.

We rallied the troops and tightened security, ready for whatever bullshit they decided to pull next…only for them to go strangely quiet. Ordinarily, this would be a good thing, but I'm not convinced it is. As we recently learned, the Hell's Vipers are in bed with the Satan's Savages, the outlaw MC who murdered Tate "Hands" Grimes's sister-in-law and nearly killed an innocent baby. Had Tate's sister-in-law not managed to get her baby out, the little girl would have died.

And that's what fucking worries me.

They're up to something. I'd very much like to know what.

"Look," Autumn huffs. "It's not like I knew anyone was filming. And he's the one who called me a stuck-up bitch first." She scowls at nothing, her cocoa-colored eyes snapping fire. "As if I owe him common courtesy after he sent me that dick pic and scarred me for life. The man is delusional!"