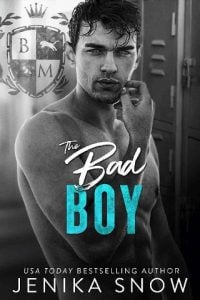 “Why are you all dolled up?” Oliver asks, leaning up against the side of his truck and watching me.

“I’m not dolled up.” I grab another box and haul it into the back of my mail truck. When I come back out, Oliver is still standing there watching me.

“You are too. Your lips are shiny.”

“It’s lip gloss. I wear lip gloss all the time.” Maybe not the mascara, but I don’t mention that.

“Hmm.” He doesn’t sound convinced as he looks me up and down. “Something is different.”

Oliver is three times my age and very happily married. If he wasn’t, I’d be telling him to get lost. His wife makes the best sprinkle cookies I’ve ever eaten, and Oliver brings me some at least once a week.

“Did you cut your hair?”

“Nope.” I pull my braided hair over my shoulder. I always keep it braided when I’m at work so it stays out of my way. I also always keep a bow tied at the end. I might be a mail carrier, but I can make it cute. I’ve got to do something to liven up these navy overalls.

“All right. I’m only asking because you look extra nice this morning,” he says, giving up on what I’ve done differently today.

He’s right, though, not that I’ll admit it. If I do, he’ll start grilling me for information. People think beauty salons are full of gossip? The post office gets to see it all firsthand.

I have on a bit more makeup today, but that’s not saying much. Normally I put some gloss on my lips and call it a day, but I had some extra time this morning. It has nothing to do with a sexy recluse that’s on my route.

Maybe I checked to see if the mystery recluse was getting any packages today, but it’s not a big deal. He gets something delivered every day. What the heck is he ordering all the time? Since he’s always home, I guess everything. And I’m not only saying he’s always home because he’s there during the day. I’ve never run into him once in the town of Hollow Oak.

Everyone knows everyone here. It’s almost impossible not to run into people at some point, which is why I don’t date anyone from town. Though for him, I’d make an exception and not only because I wouldn’t have to risk running into him if things didn’t work out. That’s just how big my crush is.

“We need you at the front, Gracie.” Mick’s voice comes over my radio, and I grab it from off my hip.

“On my way,” I respond before waving at Oliver and shutting the back door of my truck.

I tuck my clipboard under my arm as I make my way to the front of the building. Most of the trucks are already pulling out, and I need to get going soon.

I knock on Mick’s open door, and he motions for me to come in. “I got a complaint from your route.”

“Really?” I scrunch my nose in surprise.

I’m the only driver for Hollow Oak since I know where pretty much everyone in town lives. It’s not often I get a complaint. If I do, it’s for something being broken inside their box, which I know has to have happened before it hit my warehouse. I handle all my boxes with extra care. Nothing is worse than being excited for something to arrive and it not being what you hoped for.

“Oh, Gail did my route yesterday. Remember, I took the day off.” Gail fills in for anyone that takes a day off or lends a hand if you have more than a normal amount of deliveries. I can usually handle Hollow Oak easily enough on my own.

“Yeah I know. I just wanted to give you a heads up on what happened. I guess this guy thought Gail was late and rude. He said no one else is to deliver his packages but you. If you're off, then his packages are to wait till you’re back.”

“What?” I say with a laugh. “Can he even make that kind of request?”

“Not typically, but he must know some people in some high places because we’re going to make sure only you drop his crap off.”

“Who is this even?” Before the words are fully out of my mouth, I already have an idea of who Mick is talking about. My sexy recluse. I didn’t think he cared much for me since he only ever grunts. But it didn’t stop me from trying to talk to him. Or the mega crush that’s taken on a life of its own.

“He doesn’t give you problems, does he?”

“Nope.” If anything, I think he would think I’m a problem. I can be a bit nosy when it comes to him, but it’s hard not to be. He’s new to Hollow Oak, and the only thing I know about him is that he built his beautiful house. A house that he never leaves.