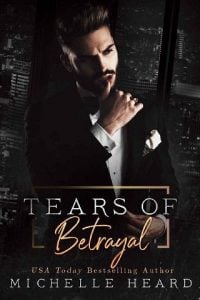 Staying two steps behind Alexei, I’m on high alert for any sudden movements from the guards as we enter Jakub Kaminski’s compound in Poland.

I’ve been a custodian to Alexei for seven years, and our relationship has gradually changed from protector and assassin to business partners and best friends.

I was trained to protect Alexei Koslov, an elite assassin, which makes me the best protector in the world. While Alexei carries out a job, it’s up to me to keep him alive. Together we’ve become an unstoppable force.

He is my life’s purpose. The one who owns my loyalty.

Where Alexei is charismatic, I’m quiet.

He’s in the spotlight, and I’m his shadow.

Over the years, Alexei has branched off into the shipping of illegal goods, and lately, we’ve only been taking out high-value targets.

“Ready?” Alexei mutters under his breath.

“Yes.” My eyes move from one guard to the next as we’re taken down a hallway. Alexei is assassinating Kaminski as a favor to the Bratva. We’ve arranged a meeting with Kaminski under false pretenses of purchasing weapons from him.

Getting in is easy. Getting out will be a bloodbath.

The tiles gleam under our feet, the walls of the compound white, with plants and art pieces breaking the sterile atmosphere. It’s in total contrast to what happens on the grounds. Kaminski is also a sex trafficker, and one would expect the floors and walls to be covered in all the blood he’s spilled.

Reaching the door that leads to the room Kaminski is waiting in, a guard holds up his hand and orders, “No weapons. Leave them here.”

Alexei lets out an amused burst of laughter. The guard moves to search Alexei, but with a shake of my head, the guard pauses.

“Don’t touch him,” I warn, my tone filled with the promise of death.

“Let them in,” Kaminski calls from inside the room.

Frustration flashes over the guard’s face, not happy that we’ll remain armed.

I stay behind Alexei as we walk into what seems to be a dining room. The weapons Alexei asked for are spread out on the table, which is big enough to seat twenty-four people.

There are only two men in the room with Kaminski. Three in the hallway. Five stationed out front, and I’m guessing five to ten at the back of the house.

The compound easily holds between thirty and fifty men.

Alexei begins to talk business with Kaminski, and I watch as the two guards relax. That’s Alexei’s specialty. He makes you think you’re safe instead of seconds away from dying.

I’m four steps away from the one guard, seven from the second.

“Good, but I lost a shipment,” Kaminski answers, his eyes narrowing. “You wouldn’t know anything about it?”

Yuri Ivanov was responsible for the shipment of weapons being ‘lost.’ That’s when he asked Alexei to take out Kaminski. Yuri wants to expand because he’ll take over from his father soon as the head of the Bratva, and I suppose he wants to show his worth.

Alexei lets out a chuckle, shaking his head.

I move at the same time as Alexei. My elbow meets the first guard’s nose, slamming the bone into his brain while I turn, and using his body as a shield, I take out the other guard with the first one’s semi-automatic. I drop the dead guard, and pulling both my guns from behind my back, I turn toward the doorway as the first man comes running in.

Opening fire, I take them out one after the other while staying near Alexei, who has a gun to Kaminski’s head. It only takes seconds for me to dispose of the nearest guards.

“For you, I thought I’d make an up-close and personal appearance,” Alexei chuckles darkly. “For the Bratva.” He pulls the trigger before Kaminski can bite out a threat or plead for his life. After the body slips from his hold, Alexei buries two more bullets in Kaminski. I spare the head of the Polish Mafia one glance, watching as his eyes turn glassy as his soul leaves his body.

“Stay behind me,” I instruct Alexei. Not that I have to. After all the years of working together, we’re completely in sync with each other.

We begin to move, stalking out of the room and down the hallway. A guard comes running around the corner, and as his lips part to let out a shout, I pull the trigger of my Heckler & Koch. The bullet hits him between the eyes, making him drop on the spot.

When I started as Alexei’s protector, I used to keep count of how many people I killed, but I stopped when I reached two hundred. Now everything in me is quiet as chaos erupts around us. There’s no thundering heartbeat. No quickening breaths. No sweat beading on my forehead.

I hear commotion explode around the compound, boots on the ground, orders being shouted, weapons being readied. When we turn the corner leading to the front door, instinct takes over, and I start firing one bullet after the other.