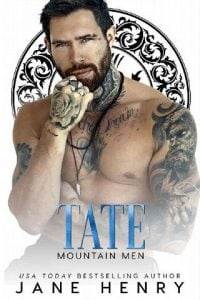 I walk along the icy dirt road, my hands shoved in my pockets. I don’t bloody know where I’m going or why, but sometimes when I need to clear my head, nothing works better than a good, brisk walk where the clouds meet the sky, and the mountain air makes everything seem clearer.

“No doubt she’s a woman, Tate, and she thinks we can be fucking toyed with. But she’s a spy, and a dangerous one at that. Find her.”

Bailey, our resident dog, trots dutifully beside me. He’s my sister-in-law Cairstina’s, but he likes to hang around with the rest of us, and as soon as he sees me putting on my boots, his ears perk up and he gives me puppy dog eyes. I’m grateful for the company just now.

I like that he keeps up with my brisk strides and isn’t deterred when the icy wind picks up. He faces it bravely, and when snow begins to fall, he gives me a friendly look and laps at the falling flakes. Makes me smile, before I sigh and continue my walk.

I’ve got other things on my mind, too.

Today’s the anniversary of when we found our eldest brother, Tavish Cowen, was gone. I don’t like to remember the details, but none of us can forget Mum’s cry, or the way she collapsed against Dad when she heard the news. It’s the worst memory I have, one I wish I could eviscerate forever.

I don’t allow myself to forget it, though. I force myself to dwell on the memory sometimes, when I need to remember who I am and what my purpose is.

I’m second-in-command of the most powerful mob in Scotland. The name Cowen inspires both fear and respect to anyone who hears it. I can’t afford to go soft. I can’t fucking afford it.

Mum gets a bit melancholy around now, but it helps having little ones about. Cairstina and Leith’s wee bairn’s started toddling around, and Mac’s wife Bryn’s expecting their first in a few months.

Mum loves having bairns in her lap, and it seems half the time I find her in the library reading a book, it’s a dog-eared board book and she’s got the wee one nestled in her lap.

She’s preoccupied, though. I know she is. And today I need to find out why. I’d like to give her some space to grieve, for a little while.

I loop around the cave that flanks the side of the mountain, the furthest spot away from the rest of the homes that surround our main lodge. Deep in the Scottish Highlands, we’re hidden from the view of most people, the large lodge the epicenter of our entire Clan, surrounded by our wee, privately owned chalets that encircle it. The inner members of our Clan live nearby, dozens nearly within arm’s reach. Hidden, though. Even from where I’m standing, the only telltale sign of civilization is the chimney smoke rising high in the air.

The moon’s beginning to rise, the sky around us a bluish hue as the sun settles below the mountain peaks. Suddenly, without warning, a woman’s high-pitched scream pierces the night air.

I’m instantly alert. Bailey freezes and meets my eyes, his body tense, nose pointed in the air. Adrenaline surges through me.

“Where the bloody hell is that coming from?” I mutter, whipping my head to the left, then right. Between the mountains and the wind, it’s impossible to tell the location of the scream, when a second scream follows the first.

“Find her, Bailey,” I tell him. “Go, boy.” Fully trained, he’s off at a run before I’ve finished my sentence, heading toward a barren, desolate spot on the side of the mountain.

I watch my footing, as the terrain’s rocky and icy, but Bailey doesn’t wait. He races ahead, intent on finding whoever’s in distress, so I focus on following him.

Who is it? It’s hard to tell from a woman’s scream who she is, but it could be anyone. My two sisters, my brothers’ wives, my mother, and grandmother all live here. Not to mention the occasional visitor from the McCarthy Clan in Ireland.

Bailey takes a sharp turn, and I keep up with difficulty. Suddenly, the trees give way to a clearing, and I can see everything. I freeze, heaving from the effort of sprinting in the frigid air at Bailey's pace, and it takes me a minute to process the scene before me.

Looks like every damn one of the girls is bundled in fluffy coats, with hats, gloves, scarves and boots, taking turns sledding down the mountainside into a valley below. I can’t even identify them all from here, but I can make out my sister-in-law Cairstina, and my sisters Islan and Paisley. Two more girls are apart from the rest, at the top of the hill, preparing to go sledding down.