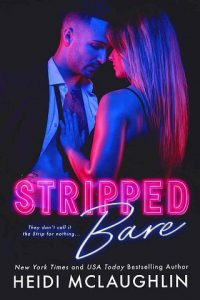 The stench of deep fry emanates from my clothes. I hate the smell and I know the other girls can smell it, but I ignore the looks they’re giving me and hustle through the dressing room to my locker. The older women and the ones who have been stripping here longer always look down on the younger girls and the newbies. I’m somewhere in the middle. I stripped here when I was younger, during my first trimester with my daughter, and then again after she was born when I had my figure back. Actually, stripping helped me tone as a result of all the pole work that I had to do. I took some time off after that, but I always come back because the money is fast and somewhat decent. Each time I leave, though, I say that it’s for good and that was the last time and yet a few months later, I always find myself back again, knocking on Lew’s door and asking for my spot in the rotation back. Girls come and go around here, and in this business you can’t expect to make a lasting connection with anyone.

I strip down and throw my dress, apron and nylons into my bag as quickly as possible before the stench of grease becomes any more noticeable. I change into a thong and bootie shorts, add tassels to my nipples and cover them with a bra before slipping a tank top over my head and stepping into an old pair of cowboy boots that I picked up at the secondhand store. I have an array of costumes meant to hit the mark on every fantasy a man can have. Cowboys, librarian, naughty schoolgirl . . . you name it I’m doing it. I need the money. More so now than ever. My kid is getting older and she’s seeing things she shouldn’t, like her grandmother being so drunk that she can’t get up to answer the door, or strange men in the house. She’s ten and shouldn’t have to babysit an adult. Nor should she have to live in the slums, but that’s on me.

Seventeen and pregnant isn’t how I saw my life. I had had enough of living with barely any food, no new clothes and the strange looks, so I swore that I was getting out. I was smart, got good grades in high school, but none of that mattered once I found out I was knocked up and the baby daddy had already left town. I tried to tell his mother, but she took one look at me and shut the door. Back then I didn’t want money, but I do now. I’d take that money and run right across the tracks, under the bridge and through the fucking blueberry bushes if it meant my kid wasn’t going to be a victim of a drug deal gone wrong or end up with a drinking problem by the time she’s a teen.

Morgan, though, she’s a good kid who loves to read and is a whiz at math. She’s all I have in this world and I’ll do anything I have to, to make sure she has food and clothes.

So I strip at night and wait tables during the day. Depending on the day or night, one pays better than the other, but they’re jobs that I need. I have a goal. I want to move Morgan and me into a better neighborhood. One where kids want to play and not sell drugs. I want her to live in a place where she feels safe and doesn’t need to hide in the closet of our bedroom because my mother invited one of her friends over.

My dreams for Morgan are unreachable, I know this, but I try every day to make them happen. I want such a different life for her that sometimes when I look out the window of the city bus I’m on and I see other kids her age walking along the street without a care in the world, I imagine her being one of those kids. If only . . .

Waiting my turn, I go over my self-choreographed routine in my head. When I was little, I wanted to take dance lessons like all the other girls in my class, but I couldn’t, so I taught myself by watching music videos when my mom would actually remember to pay the cable bill. Even now, Morgan and I will go to the library so I can watch clips while she looks for books.

As soon as one of the other girls comes off the stage, my music starts. “Back That Thing Up” by Justin Moore is how I start my night off. I want to be remembered so they’ll stay for the next set. Right now I’ll play the sweet little cowgirl before the sexy librarian blows your mind. This is my high-energy song and the one I love dancing to the most.