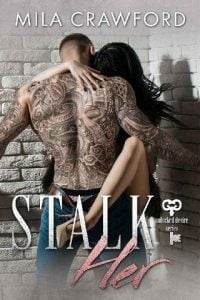 The music vibrates through the floors, allowing the rag dolls to gyrate and grope one another, completely intoxicated.

On a typical night, women come here to show off their bodies, to feel better about their empty lives. While the men come here to forget how pathetic their existence is by finding a willing hole to stuff for a few hours.

We found here the true nature of the sickness known as humanity. Maybe that is why I never left.

When I started working for Vincent Ricci, I was a punk kid who just needed a few dollars so that my mother wouldn’t lose our house. Turned out violence and murder is something I am good at—a little too good. Not only could I do what men who’d been on the job for decades couldn’t, but I also liked it. So I'd stayed, never left, eventually becoming one of the most powerful men in the organization and the owner of this carnal human pit.

Over the years, I’d made a habit of walking the floor of the clubs I ran, usually standing at my perch above the fray, viewing the stain on the world known as humanity.

I fucking hate people, even the ones I like. I usually find them distasteful. Their minds full of the mundane, their desires juvenile. The disdain probably gave me the ability to do what I need to do without blinking an eye.

I am about to head back to my office when she appears, something different, someone beautiful in a world of filth. A slight-looking girl with long, silky black hair, a raven moving gracefully amongst the trash.

The typical women, pathetic creatures, surround her, flaunting themselves for even a glance from the piece-of-shit men nearby, but not her. She stands there, trying to disappear, and it makes me want to view her more.

My eyes feast on her before two fake blondes drag her to the dance floor. She doesn’t look like she wants to take part. Her long black hair flows as she shakes her head, trying, but the blonde carcasses pull at her anyway.

Her hair flows from side to side as she shakes her head, waving her friends off, trying to say no, but the blondes just pull at her, tugging, basically dragging her until all three move to the center of the dance floor. The black raven stands there, a beautiful bird whose wings got clipped. The two blonde vultures dance around her, trying to show how attractive they are to any prying eyes around them. They don’t realize that beside her, they are nothing but flecks of dirt discarded on the ground.

The raven looks so uncomfortable standing there; she sways her body to the music, but the rhythm is ultimately off. A random man, nothing special, approaches her. I am familiar with the type; they look for girls who appear unsure of themselves so they can prey on them, but he doesn’t realize the raven has my attention, and now she is mine. Nobody messes with what is mine.

My eyes contact with a few of my boys, prominent, well-trained men who make sure everything in the club runs smoothly. It takes care of the unwarranted riff-raff who stumble in the place. Usually, we don’t make a big deal about the men hitting on women, but the idea of anyone touching the raven doesn’t sit well with me. The violence I keep leashed has now roared to the surface. I am not the type of man you want to be around when I feel unhinged.

I push my way through the crowd, gagging on the scent of cologne used to mask the stench of sweat underneath. I stand a few feet away from the raven, my gaze roaming her body and zeroing in on her trembling hands as she tries to push the man away. I don’t like that he’d frightened her. The rage that always lurks under the surface of my skin takes over. The monster, ready and waiting to take out anyone who dares make the raven unhappy.

“I suggest you step away from the lady.” My voice is calm, level. They taught me at a young age to control my feelings, to hide my wants, to cage my desires. There is no reason for this little shit to think he has anything on me. Just another commonplace interaction between a bouncer and an aggressive fucking drunk.

The man snakes his arm around Raven’s waist. I glance up, see how uncomfortable she is. I don’t say a word. I just push the two blondes who ignored my raven out of the way. I pick the raven up and move her behind me before grabbing the man’s wrist. I push his hand back until I hear a snap.

“What the fuck, man?” the man screams in agony, his good hand going to his limp one. His face contorted with pain.