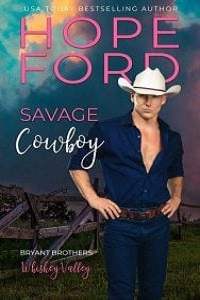 I’m making a fool of myself.

I don’t know what I’m thinking or why the hell I’m pacing up and down the sidewalk in front of the bookstore, but here I am. I should be home. I have an early day tomorrow, and I shouldn’t be here peeking in the store windows. Heck, every day is an early day for a rancher, but I can’t make myself leave.

I’m pretty sure I just met my future wife. It’s ridiculous to think, and just the thought seems to make my heart race in my chest. I’ve been a confirmed bachelor for a long time now, and this feeling that I have is ridiculous.

But here I stand.

“You’re going to wear a path into the concrete.”

I flip my brother Griffin the bird and keep my pace as I walk back and forth.

He eventually shifts and stands right in my way so I have no choice but to stop and look at him. He’s laughing, and it’s obvious he’s enjoying this.

I figure the best defense is a good offense. “Congratulations, by the way.”

His smile gets even bigger, and I shake my head, still not believing what happened earlier. My brother, the man that always keeps to himself, just asked his girlfriend to marry him. He and Hailey met when she came to the Double B Ranch to study ranches for her next romance novel. She and Griffin fell in love, and tonight, of all nights, he asked her to marry him.

He nods his head at me. “Thanks, little brother.”

I grimace. I may be a little younger, but I’m definitely not little by any means. “Yeah, sure. I’m happy for you.” And I am happy for him. I’m being honest about that, but I’m not happy about getting the brush-off from Amanda.

“Sooooo, you know I only needed help carrying in a few boxes, right? You drove so you wouldn’t have to stick around.... but here you are... still here.”

I stop pacing and stare at him. “What? My future sister-in-law is making her big debut in Whiskey Valley. She’s signing books and getting to know the townspeople. Why wouldn’t I want to stick around for that?”

Griffin has the nerve to laugh. “Oh, okay! I thought you may have been sticking around for the bookstore owner.”

I look at him with my most innocent look, trying not to give away a thing. “Who? Amanda?”

Griffin barks out a laugh this time. “Yeah, Amanda. You know the young woman in there you’ve been following around like a lost puppy dog...”

I take a step toward my brother, and my hands fist at my sides. “First of all, I haven’t been following her around like a lost puppy dog. Second of all, I’m out here. I’m nowhere near her.”

He rolls his eyes. “Really? The only reason you’re out here is because she won’t give you the time of day and she turned you down when you asked her out. Are you out here licking your wounds or trying to come up with another tactic?”

I open my mouth to deny it and then slam it shut. It’s the truth... there’s no reason I should be denying anything at this point, and even though I know it’s crazy and I’ll probably regret it, I’m still going to do it. I’m going to ask my brother for advice. “Okay, what do you suggest I do?”

He lifts his chin at me. It’s dark outside now, and the only lights are the ones from the shop windows and the streetlamps. “She’s too young for you. You’re at least ten years older than her.”

I shrug my shoulders. “So what? She’s of legal age, and you know as well as I do that age doesn’t matter.”

Griffin crosses his arms over his chest and blows out a breath. “Okay, well I guess I need to bring out the big guns.”

When he doesn’t continue, I roll my hand in front of him as if to say Let’s get on with it. I keep looking in the window, and I swear I’ve seen Amanda peek out here a few times. Could she be looking for me?

“I think I know why she turned you down.”

My eyes widen, and I wait for him to continue. When he doesn’t, I swear I’m about to kick him in his shins. “Come on, Griffin. Get on with it.”

He looks in the window, spots his fiancée, and smiles before turning back to me. “Right. Uh, the reason she’s not interested.... she’s a McCoy.”

“What?” I ask him, shaking my head. “She’s a McCoy?” And then it hits me. She’s the only sister of the McCoy brothers. Her family is a big ranching family, and her brothers all compete on the circuit. And even though the McCoy ranch is right next to ours, I haven’t seen her since she was little and wore pigtails. There’s no way. “That’s not...”