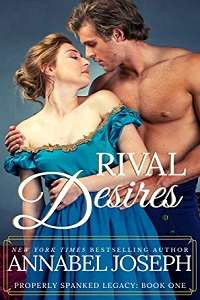 The Marquess of Wescott leaned away before his victim’s fuchsia-pink slipper could connect with his forehead. It caught the edge of his gold-blond hair instead, which had long since straggled free of its velvet tie.

“Don’t be naughty, Ellie,” he scolded, delivering a few more spanks to the quivering backside balanced upon his lap. “If you can’t behave yourself, I’ll have to tie you up.”

“Oh, you wouldn’t be so cruel, sir,” she cooed, twisting herself upright until she managed to straddle his thighs. She tugged one of his wavy locks, not at all intimidated by his stare.

“I think we both know I can be considerably crueler.” He taunted the buxom courtesan with a hard twist of her nipples, reveling in her pain-filled moan.

Across the room, his friend Viscount Marlow tightened his fingers in Berta’s hair, urging her to take his cock deeper in her humming throat. She wiggled her ample arse while she serviced him, showing off the cane welts he’d made minutes earlier.

“If only Lord Townsend was here, my sweet,” he said, thrusting between her lips. “He’d have been pleased to add a few more stripes to your bottom while you suck me off.”

“Ooh.” She paused long enough to simper with theatrical alarm. “He’d bugger me too, wouldn’t he, milord? Right up my sore arse, hard and rough like?”

“You’d love that, wouldn’t you?” Marlow pushed back his riotous, white-blond hair and favored her with a grin. “And Towns would love to do it. Too bad he’s off pining over someone.”

“Pining over who? Some society lady?” Ellie sniffed. “Such a faithless customer. He hasn’t been here in weeks.”

“Tedious, to be in love, and miss out on such glorious perversions,” said Wescott, arranging Ellie back over his lap.

“More tedious still to be in love with someone he can’t tell us about,” said August from the silk-draped bed. The dark-haired man was more formally known as the Earl of Augustine, but he didn’t look very formal now as he stroked his rigid cock, waiting his turn. “I bet he’s burning for Lady Pissy Pot.”

“Good God, not her.” Wescott spanked Ellie’s cheeks for emphasis, then pointed at his friend. “And it’s Lady Priscilla Pott to you, you perverse bull calf. She’s got money and class, even if she hasn’t the best temper. You wish you had half a chance at courting her.”

“I wish no such thing. Unlike you, I don’t have anyone on the hook, and I prefer it that way.”

Wescott rolled his eyes. Everyone in the ton knew he was all but betrothed to the beautiful Lady June, not that he wished to think about that now, with a famously lewd courtesan draped across his lap.

“If you ask me, Miss Priss would be perfect for Towns, with his love of proprieties,” said Marlow. “As for me, all I want is right here.” He fondled Berta’s full, round arse, then bent her over a chair for more caning. The lass danced and whined at each stroke, but also arched her back with the grace of a quality professional.

And what would happen once he won the hand of Lady June, and settled down into a society marriage? All his life, women had thrown themselves at him with lusty abandon, earning him a reputation as a rake. His handsome features, combined with his bold height and stature, had been more a curse than blessing. His parents, the Duke and Duchess of Arlington, hoped a marriage would improve his reputation, but life would be dull without forays to the brothel.

At Marlow’s invitation, Wescott gave Berta a few stripes of his own, flicking the cane mercilessly against her already tender cheeks. She gave a tormented squeal at each stroke, her feigned agony rousing him to full staff for the third time that night.

Wescott shoved into the courtesan’s soaked quim, fucking her steadily enough that she could still fellate his friend, but firmly enough to elicit some ball-tightening groans. Meanwhile, August alternated between spanking and diddling Ellie on the bed, until her giggles and cries rose to moans of ecstasy.

Suddenly, a gruff male voice interrupted them, and a fist pounded on the door. Charlie, one of the house bruisers from downstairs, shouldered it open and entered, gasping for breath.