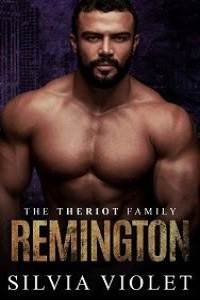 I shouldn’t be in the Landrys’ territory, but I needed info. I could have sent someone much lower down the food chain, but I wanted to do it myself. I couldn’t risk any slipups, and there had been too many of those recently, mostly thanks to the idiots I called brothers. If the Landrys were funding the fucking gunrunners who thought they could ignore my family’s authority in New Orleans, they were going to pay for that move against us, but I’d be damned if I’d let anyone tip them off that I was on to them. So I was in a shitty part of town—the Landrys operated with the rats and lowlifes like the scum they were—driving a black SUV no one would identify unless they peeked under the hood and saw all the modifications I’d paid for.

I wasn’t dressed for stealth, though. I should have been in my Ferrari on a date with a man who’d made it very clear how much he wanted to do my bidding, and I hadn’t changed out of my bespoke suit when an informant had called and said the Landrys had an important meeting that night. It was supposed to be a recognizance mission only. If I had to get out of the car, I wouldn’t be worried about subterfuge; I’d be going for the kill.

But after hours of waiting, I hadn’t seen shit. The rats were deep in their holes. I decided to circle the area once more then head home, assuming the intel had been wrong. As I passed an alley, I finally saw two men talking. I pulled over to get a better look, hoping they would remain distracted with each other.

In the dark, it was impossible to make a positive ID. One of them was huge, probably six foot five, exactly the size of Clark and Charles Landry, who were identical twins and leaders of the Landrys’ business. The man’s beard told me that if it was one of them, it was Charles. Clark preferred a clean-shaven face. Charles handed a case to the other man who was nearly a foot shorter, lean and wiry with long dark hair pulled into a ponytail.

I wanted to know what was in that case. Payment if I had to guess. I reached into my jacket pocket for the burner phone my youngest brother had handed me as I’d headed out the door and snapped some photos. I’d get my computer guy, Blackjack, to analyze the photos to see if he could identify the smaller man. If, as I suspected, he was one of the gunrunners, I now had confirmation they were in bed with the Landrys, and it appeared relations weren’t good. We could exploit that to fuck them both over.

I expected the smaller man to leave quickly, but he remained, talking to Charles. I took the risk of pulling out a scope for a better look. I crawled into the back seat so I was deeper in the shadows, then sighted them. That was Charles all right, and he looked nervous. He shifted from one foot to the other as he talked animatedly with the other man. If only I could hear what they were saying. I moved back into the driver’s seat and put the scope away. I was about to pull away from the curb when the suspected gunrunner pulled a weapon and fired. Charles wavered, then fell to the ground. Dark liquid spread out under him.

The dark-haired man walked casually back to his car. I eased out into the street, not wanting to be seen by anyone who came to investigate the sound of gunfire. As soon as I was away from the scene, I’d get my brother to contact his network of informants and figure out what the fuck was going on. I used my rearview mirror to watch the assailant climb back into his car.

When I glanced back at the road, a cat was right in front of me. I swerved to avoid the animal, but when I tried to swing back onto the road, I remembered too late that the SUV didn’t have the turning radius of my beloved Ferrari.

I slammed into a dumpster and knew immediately the vehicle’s front end was fucked. The man who had shot Landry drove on by, not giving me a second glance. I was thankful he was focused on his own getaway. The last thing I wanted was for him to get an up-close look at my face.

When I tried to place a call for assistance, my phone died on me before it even connected. Fucking Corbin had forgotten to charge it. Now I was stuck in enemy territory with a busted car and no phone. Could the night get any better?

I took a breath and looked around, assessing my surroundings. That was when I first saw the beautiful, red-haired young man. Based on his clothes and the forced smile on his face, I realized he was working the block, which was known as a place where men could pick up a rent boy on the cheap.