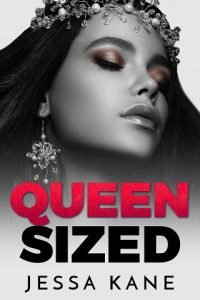 “I’ll tell you this one last time, Connor. I do not want a wife.”

My best friend and advisor gives an exaggerated sigh, throwing his arm wide to encompass the merriment taking place around us. Once every two years, the Joining takes place. A time for two neighboring kingdoms, Fallstrom and Lavere, to merge and celebrate their peace treaty. It is also considered a prime chance for matchmaking—in which I have no interest. “You’re a king now. You could have your pick and yet you choose to squander your good fortune.” His expression is one of disgust. “Luck is wasted on you.”

“Is it?” I rap a fist off my chest. “Explain how I’ve survived a lifetime of battle.”

“Pure stubbornness. You refuse to die.”

I throw my head back and laugh, causing conversations to cease around me. “Don’t sound so disappointed. You’d be out of a job if I went to meet my maker. And quite a bit of coin, at that.”

Connor waves me off. “I’d get to keep my sanity, though. You can’t put a price on that.”

“Why should your sanity depend on whether or not I take a wife?”

“Because without an heir, the kingdom lacks stability. We’ve talked about this many times, Corbet. Usually while you’re lopping off heads with your blade. Nonetheless, the matter has been a topic of discussion.”

“Forget what I said about marrying. I couldn’t be responsible for subjecting a gentle woman to your savagery.”

With a snort, I snag a mug of ale off a passing tray, down every drop in a matter of seconds and toss the cup onto the ground over my shoulder. “If I were to a select a woman, she fucking well wouldn’t be gentle.”

“Ahh.” Connor stops in his tracks, his mouth curving like a cat who caught the canary. “What would she be?”

“Oh no, you sneaky bastard. I’m not going to start listing qualities so you can try hunting up a suitable wife. I’m not marrying—and that’s final.” I swipe a hand across my mouth to remove foam left behind by the ale. “Now a mistress? That I will accept. She can give me an heir as readily as any wife.”

“You would deny your child legitimacy?”

A burn starts at the top of my throat and burns downward into my chest. “I was a legitimate child and it didn’t mean a damn thing to my parents. Whether or not my child is legitimate, they will have my training and care. My throne. The son of an unmarried man and woman has the same rights as a child who is a product of a union. There is very little shame attached and it is easy to overcome.”

We walk in silence for a stretch, combing through the moonlit valley, taking in the scene before us—and it is quite a scene. Revelers dance around a twenty-foot-high bonfire. Unattended children and dogs weave in and out of the groups of adults, their laughter carrying up to the stars. Young women make eyes at groups of eligible men, choosing who they will pursue over the course of the Joining. Many warriors will leave with a bride in tow. And many women will leave with life already growing in their bellies.

It’s as if everyone is under some kind of idiot spell for two days.

I’ve missed the last two Joinings because I’ve been locked in land battles and concentrating on rebuilding the deteriorating kingdom of Fallstrom, the throne of which was passed to me by my father upon his death. But truthfully, I don’t regret my lack of attendance. Not at all. The Joining is of little interest to me. I’d rather be caught dead than making moon eyes at a bunch of giggling maidens. Or gossiping about romantic matches like an old washer woman. A sensible man could choke on the desperation in the air.

I wrap my fist around another mug of brew as the tray passes, foaming liquid spilling down over my scarred knuckles, making them sting and reminding me where I belong. Swinging a blade, fighting for territory and resources needed by my people. I’m not a man meant to be dressed up and I’ve refused to do so even this evening, despite Connor pleading with me to look the part of a king. When I throw back my ale and some droplets catch in my beard and drip onto my tunic, he is further distressed.

“You are hopeless,” Connor sighs witheringly.

“Am I? Everyone still rushes to get out of my way,” I remark, scowling until a band of drunk lute players scurry out of my path.

“That is because you are the height of our castle wall.”

Again, I pound a fist off my chest. “And twice as impenetrable.”

I’m surprised when Connor pulls me to a stop. “Listen to me, Corbet. I know there are…good reasons you’ve been put off by the whole wife business…”