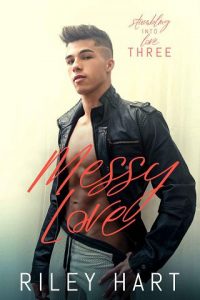 I knew I shouldn’t watch him the way I did, but I couldn’t seem to stop myself. I tried to pull my gaze away all the time, but it would always find its way back. At first it was confusing. Then I understood why and wished I didn’t.

Bill was my best friend, but more importantly, he was a boy.

If my dad found out… Well, I didn’t want to think what would happen if he did.

So I tried to tuck these thoughts into the back of my mind, to pack them away and keep piling the lies on top of them. Eventually they’d go away.

They had to go away, right?

What would I do if they didn’t go away?

“Dude, that was a badass catch you made in practice today.”

I watched the muscles constrict, twist, and move in his arms as Bill lay on the floor of my treehouse, throwing the football up and catching it over and over again. “Huh?” I jerked my eyes away when Bill rolled onto his belly and looked at me.

“That catch you made in the end zone. Coach was impressed too. I wish your dad had been there to see it.”

I nodded. Bill was the best. He was the only person who knew the kind of pressure Dad put on me—to be number one, to be strong, to be tough and hard and just like him. Dad wanted me to follow in his footsteps, wanted to make me into him. He didn’t like it when I screwed up, looked at me funny when he caught me drawing pictures of flowers and things like that. It was all weird to me. What was wrong with sketching roses? “Yeah, I wish he’d been there too.”

I wasn’t the boy Dad thought I was. The one I wanted to be for him.

I liked watching Bill, and thought a lot about kissing him, and that made me soft. When I drew sunsets and fields with someone dancing inside of them, Dad thought that made me soft too. He always scoffed when he saw men like that.

Bill sat up and scooted over beside me. “Hey, you okay?”

I hardened my armor, slipped my mask tightly into place. “Hey, you okay?” I playfully mocked, nudging him. “Why the fuck wouldn’t I be?”

Bill didn’t respond right away. The silence stretched between us until I shifted uncomfortably, but not away from him. I liked the feel of his arm against mine, his leg against mine, the heat radiating off his body.

Liked it the way I was supposed to like girls.

His nose wrinkled slightly as he stared at me. His eyes were this unique hazel, a green mixed with brown. He had long, thick lashes and freckles and…God, he was cute. Pretty, even.

“You don’t have to do that with me,” he said softly. His breath whispered over my face.

“Do what?” I couldn’t help wondering if he felt me the same way I’d just felt him.

“Pretend? I don’t.” I froze when his lips pressed down on mine. I didn’t move for a second, then another and another. Neither of us did, but then Bill kissed me again, and I jerked away. “What the fuck? I’m not. That’s…fucking sick.”

My eyes teared up. Stung. It wasn’t sick. It was perfect. That hadn’t been my voice in my head, forcing me to say those words out loud. It had been my dad’s.

I watched his mouth as he spoke, and then it was me leaning toward him, me pressing my lips to Bill’s. He didn’t waste the opportunity like I did, and kissed me back. When our tongues touched, it sparked the best possible kind of electricity. One that gave a person life, or brought them back from the dead.

When we pulled back, I asked, “You’re…like this too?”

“About me neither,” I replied.

“My dad would kill me,” Bill said.

“Mine would hate me.”

“No one has to know.” Bill’s arm lifted, and he cupped my cheek, tickled my skin. I liked it, wanted to melt into his touch. Wanted him to hug me and hold me and take my hand in his. Wanted to feel surrounded by him.

When he kissed me, I was shocked alive again.

The treehouse became our safe space, the one place where we could kiss and hold hands, and Bill made me feel special…like I didn’t always have to be tough and strong all the time. As if it was okay to like flowers and be emotional and want someone to talk to me. I liked feeling tough and strong, but I liked feeling other things sometimes too.

Why couldn’t I do both?

The following few weeks were perfect. I blamed that for the false sense of security.

I was lying on my back, a blanket between me and the floor. Bill was on top of me, kissing me, leading the way like he did. It felt so good, like my whole body was on fire and all I wanted to do was burn. I felt like it consumed us both.