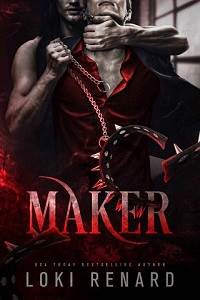 The Daddy from Hell just woke up.
It’s time to meet Maddox’s maker.

An ancient evil has woken.
A beast with no concept of human morality, risen to destroy and devour until his evil appetites are sated.
He lays very particular claim to the one modern people call Maddox.
Maker. Lover. Owner. Guardian. Captor.
Gideon has been all of these things at one time or another.

After centuries of sleep he wakes to find his Maddox playing with humans.
It was a habit he used to tolerate, but now he discovers Maddox has taken a mate. A rough criminal with wolf blood. A murderous, rude, ephemeral creature barely deserving of the name beast, or boy, as Maddox calls him.
It is all completely unacceptable.
When Maddox refuses to discard his boy, he leaves Gideon with no choice.
To restore proper order and dignity to his bloodline, Gideon must do one thing:
Kill. Will.
(And anybody else who gets in the way.)

Lorien rarely slept but Henry did, and Lorien spent the evening lying with him while he did, watching his mate breathe slowly and deeply, admiring the wolf he had taken into his bed and wondering how long it would take for Henry to get sick of him.

It had been a very long time since Lorien had lain with anybody, and even longer since he’d been with anybody who’d made him feel anything. Henry made him feel soft and weak and strong and… so many things. When he looked at Henry, he felt as though he was standing at the bottom of a very large and mysterious mountain range, about to go on a journey like no other. He was not familiar with the terrain, but he was inextricably enchanted by the beauty.

Henry had pledged his devotion, and Lorien knew better than to question that. The alpha did not make idle promises. Somehow, against all odds, Lorien appeared to have found someone who cared for him deeply. Life, such as it was, appeared to be full of potential for love and adventure. He was feeling very positive. Perhaps things could be good. Perhaps…

It was a tedious tale as to how they had gotten to this point. Captain Candy had called in a disturbance around five o’clock in the morning, and Henry had stirred when Lorien got up to deal with it, and now the pair of them were at the Library. Unfortunately, the Library no longer appeared to be at the Library.

detonation had taken place. The frontage was completely destroyed, aside from the front door which stood in front of the chaotic mess as awkwardly as possible.

Lorien stepped over the rubble, realizing that Maddox was going to literally kill him for this. Maddox had left the place to Lorien to look after and now, after over a hundred years of standing as a magnificent testament to the power of their kind, it was gone.

“Fuck me,” he sighed. “Why do these things always happen to me? It looks like something came up from under the floor? Maybe a gas leak? Maybe this isn’t my fault?”

Henry gave him a this is definitely your fault look over the rubble.

“A lot happened at the last meeting. There was a staking, a werewolf infestation, a new king…”

“Yeah. Buildings don’t care what happens inside them,” Lorien said. “At least, not usually. But tell you what, maybe you should get out of here.

There are going to be questions. Harsh questions. I don’t want another wolf purge happening.”

“I’m not leaving you here alone.”

“Why not? It can’t get any more destroyed.”

“Because you have the tact and diplomatic sense of a Tasmanian Devil. Because your subjects are going to be horrified at the loss of history. There were books here that didn’t exist anywhere else in the world, and now…”

“Yes. Well. Very sad. You know, historically, the thing all great libraries do is burn down. It's just what happens when you collect a lot of paper.”

“Listen, please go back to the house. Please. If they find you here, they’re going to blame you. It was one thing to have you make a show of power last night. I won’t be able to stop what happens next if they come in great enough numbers.”

“Stop patronizing me and go.”

Once Henry was in a car and on his way home, Lorien had time to take stock. Maybe this wasn’t as bad as it had seemed at first…

The building was basically gone. Maybe some of the books could be retrieved from beneath rubble. Did books care if they got a bit buried? Probably not.